Succulents have a wide morphologic variability. Just one genus can have hundreds of species with their own physical distinctions. Among these is the Faucaria genus, which contains a curious little succulent that’s unlike anything you’ve seen before. A truly unique plant, Faucaria tuberculosa, looks like it stepped out of a horror movie and into your garden!

Nicknamed “tiger jaws,” Faucaria tuberculosa grows rosettes that look like jaws open wide. One clump of this plant appears to be a horde of hungry green monsters. What really makes this succulent monstrous is its unique texture. The upper surface of each leaf is densely covered with white tubercles, which are hard, wart-like bumps. The edges of the leaves are also lined with soft white structures that look like menacing teeth.

Despite its sinister appearance, tiger jaws is often described as a handsome plant. It has lovely coloring and a satisfyingly compact form. Plus, it grows beautiful, daisy-like flowers (the yellow flowers open during the day and close in the late afternoon). This perennial succulent is native to Cape Province, South Africa, but it can easily be grown among your house plants or out door ground covers.

Like many cultivated specimens from warm climates, Faucaria tuberculosa is picky about its growing locations. While it can handle some light frost in the winter, it’s happiest in zones 9-11. If the weather gets too hot, it’ll put a halt on the growing season. Not to worry – we’re here to share everything we know about growing this monstrous succulent! 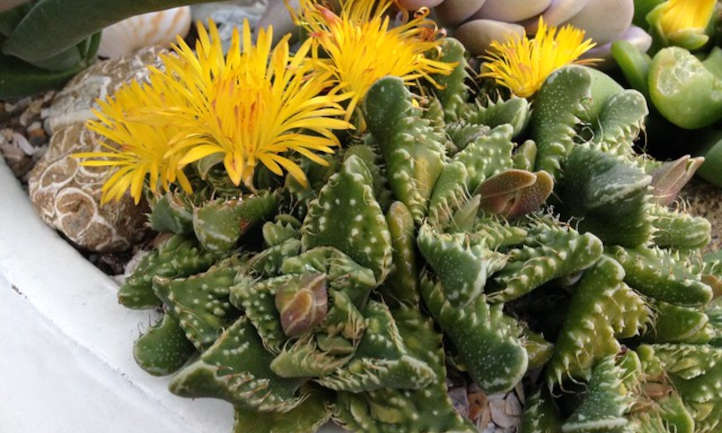 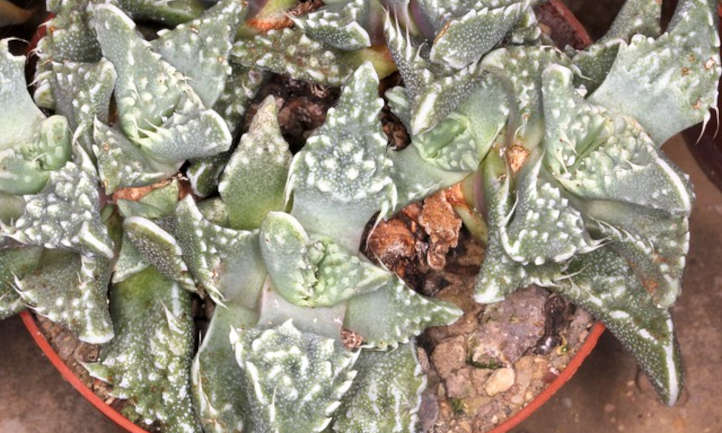 Pebbled tiger jaws lives up to its name. Source: LeveL6

We’ve labeled Faucaria tuberculosa because that’s the most commonly-used scientific name. But that name is outdated. The plant is still in the tribe Ruschieae, genus Faucaria. But since 1999, the accepted scientific name is Faucaria felina subsp. tuberculosa. It was changed to a subspecies because it can naturally interbreed with other Faucaria felina subspecies native to Cape Province. There are a few well-known cultivars of this plant, the most popular being ‘Super Warty’.

The names don’t end up mattering much because in numerous nursery stores, this plant is wrongly labeled as Faucaria tigrina (this is the case with the large majority of Faucaria species). The lazy labeling isn’t too much of a problem because these plants have a wide morphologic variability and are some of the easiest species to identify (as long as you know what to look for!).

Faucaria is a very variable taxon that includes 33 species and frequently hybrids. Many Faucarias form large tubercles, look like open jaw, and are also native to Cape Provine. It’s no surprise then that Faucaria tuberculosa isn’t the only plant to be nicknamed “tiger jaws.” However, a close look at the plant’s characteristics will help you know if the pebbled tiger jaws you’re holding is a true Faucaria felina subsp. Tuberculosa.

These cultivated plants have opposite pairs of inch-long, triangular leaves that are thick with water storage. The upper leaf surface is covered in soft white structures (tubercles) and lined with soft white “teeth.” The sometimes red leaves are a low-growing clump, forming a stacked rosette. From the center of each rosette grows a daisy-like flower with around 200 thin petals. The yellow flowers open in full sun and close up in the late afternoon.

One Faucaria felina rosette will produce offsets, resulting in bushy outward growth. This growth goes from spring to fall, though the plant may slow down in the heat of summer. During that time, when it’s exposed to bright light, the upper leaf surface, edges, tubercles, and even the soft white teeth will tinge red.

Blooming time for mature, healthy plants is in the fall. Under the right conditions, the flowers can last as long as early spring. When the petals die back, they reveal an oddly smooth, bell-shaped fruit in the center of each rosette. This fruit opens up to release seeds but only does a certain amount at a time. That way, if numerous seeds fall upon a harsh habitat, more seeds are available to replace earlier releases. 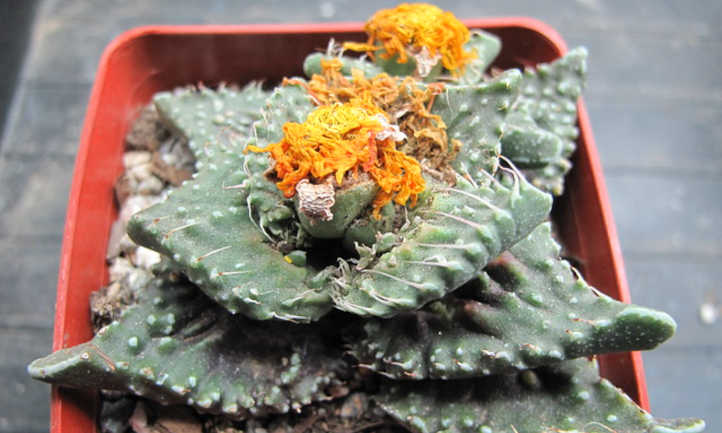 Faucaria tuberculosa may look and grow different than other Faucarias with its white tubercles, but its care requirements are generally the same. We’ll outline everything you need to know about keeping healthy tiger jaws (or one of its relatives).

Faucaria tuberculosa is used in the very dry, warm regions of Cape Province, South Africa. To mimic its natural habitats, place it in full sun outside or a south-facing window indoors. Even though it likes the sun, your pebbled tiger jaws can be damaged in high heat, so you may need to provide some light shade in the summer.

If you give your succulent some shade, do so sparingly. Pebbled tiger jaws is very prone to etiolation, which on cultivated plants shows it doesn’t get enough light. If the leaves start to look leggy, quickly move the plant into more direct light.

Faucaria felina subsp. tuberculosa is one of the hardier succulents out there. It can handle some light frost, as long as the temperature doesn’t dip below 23°F. In cool temperatures like that, make sure your tiger jaws is as dry as possible. If you live somewhere colder than hardiness zone 9, keep your Faucaria tuberculosa indoors.

A typical succulent, Faucaria tuberculosa stores water in order to survive long dry seasons. Even in fair weather, they don’t like too much moisture. We mimic this by waiting for the soil to completely dry out before watering. Moisture meters are really handy here, or you can simply check the first few inches of the upper surface.

In the winter months, drastically cut back on watering. If your Faucaria tuberculosa gets wet and cold, it could freeze and die. You should only water it if the leaves start to shrivel up. Indoor plants kept under the same conditions year-round should be watered consistently.

Ideally, you should water outdoor succulents in the morning. Then, they’ll have plenty of moisture in the heat of the day and dry out before the temperature goes down in the late afternoon. Too much humidity around the soil overnight can make your knobby tiger jaws colder than necessary. Browning and mushy leaf matter on cultivated plants shows there is too much water present. 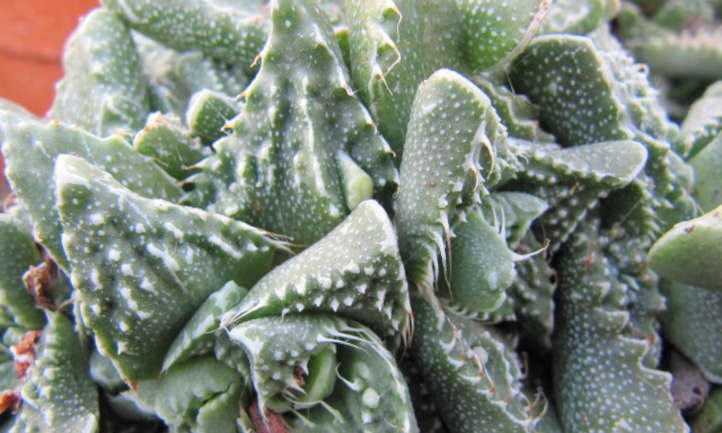 The bumps of warty tiger jaws up close. Source: wallygrom

Faucaria tuberculosa is tolerant of many soil types, as long as they drain well. We recommend a well-drained soil mix that’s meant for succulents and cacti. You can also mix your own by adding perlite or vermiculite to regular potting soil.

Pebbled tiger jaws might seem high-maintenance with their white, rough tubercles and dramatic shape, but it doesn’t ask for much when it comes to nutrients. You only need to fertilize this plant once a year during the growing season. Use a balanced liquid fertilizer that’s diluted to half-strength.

Lucky for you, Faucaria sp. rarely need to be pruned. Leaves only need to be removed if they’re diseased or rotting. If you don’t want your Faucaria felina to spread seeds, you can clip off the daisy-like flowers right before they fade.

If the upper surface of your plant’s leaves grows some funky tubercles or forms a weird shape, you can perform some cosmetic surgery on it. Simply remove the unwanted leaves from the base with your hand or a clean knife.

Unlike most Faucarias, tiger jaws doesn’t root well from cuttings. In its homeland of Cape Province, South Africa, Faucaria felina propagates through seeds and offsets. When your plant is mature enough, you can easily make more with these same methods.

Faucaria tuberculosa produces offset pairs growing side by side with parent plants, which eventually grow their own root systems. You can cut them off of the main succulent and plant them in their own container of well-drained soil. There, the offsets will grow into full plants themselves, completely independent. The species in the Faucaria genus that grow offsets can also be propagated this way.

If you have the time, seeds are a fun way to grow tiger jaws plants. If you already have a flowering plant, you can harvest a few seeds when the fruit matures in its valve-closed capsule. Sow them in well-draining soil and keep them moist and warm. If you’re planting them directly outside, do so during their early germination period in the spring. These seeds germinate in about 1-2 weeks. The first opposite pairs of leaves to sprout up may have a smooth leaf surface. As the plant grows some white tubercles and teeth will show up. 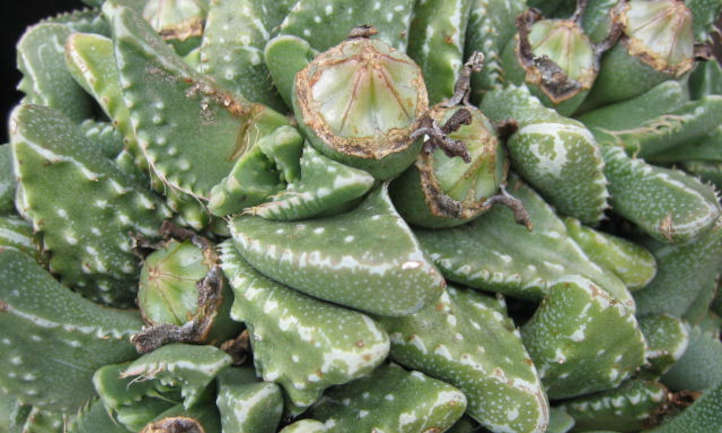 Growing succulents is usually a very easy business. Shark jaws is not an exception, but that’s no reason to get careless. You should always be on the lookout for potential problems, such as the following.

It’s fun to put Faucaria tuberculosa plants in full sun to see their red-tipped leaves. Unfortunately, too much light can sunburn the upper surface of the leaves and cause irregular tubercles. This can scar the plant tissue and cause water loss. Protect your succulents by giving them some light shade during the hottest part of the day.

You have to find the right balance with shade and your succulent. Faucaria tuberculosa etiolates easily when it doesn’t get enough light. Stretching out like that may cause the plant to fall over and rot against the ground. Once etiolated, you can’t make the plant compact again, so watch carefully for stretching leaves.

Mealybugs are prime pests you might find on your Faucaria tuberculosa. They’ll suck the juice from succulent leaves and white tubercles, leaving the plant discolored and stunted. They also leave behind a nasty honeydew that attracts ants. Beneficial insects such as ladybugs and lacewings are a great way to control mealybugs naturally. You can also use insecticidal soaps or neem oil to eradicate these pests.

Faucaria tuberculosa doesn’t usually encounter any diseases. You’re most likely to come across root rot on this plant, but even that doesn’t happen often. The rot is usually caused by overwatering or too much humidity, so a simple change in care will prevent and stop it. Rotted sections of the succulent should be removed. If allowed to continue rotting, your Faucaria felina will become much more vulnerable to diseases possibly rooted in the soil. 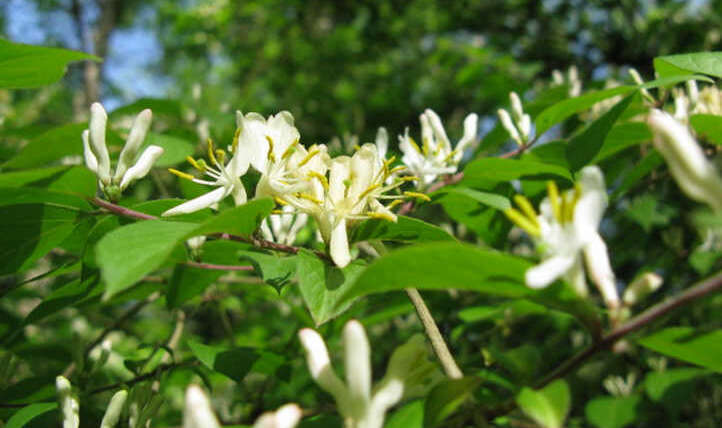