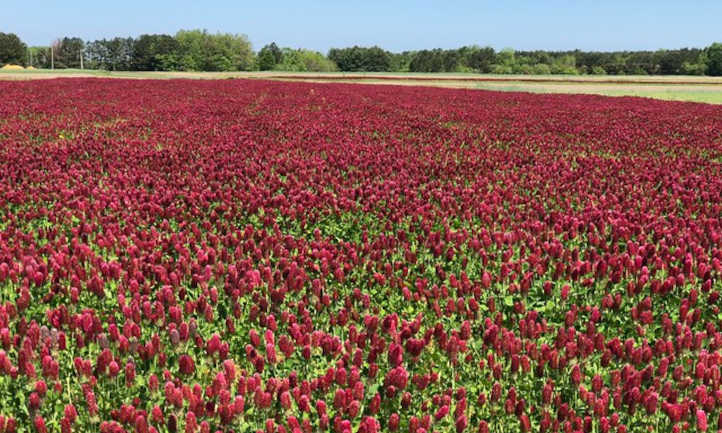 When thinking of ways to improve your soil, most people wouldn’t think of planting additional crops, let alone one that you wouldn’t normally eat! However, planting a clover cover crop is one of the easiest and most cost-effective ways of rehabilitating your soil.

Clover is related to other legumes like peas, beans, and peanuts, and is most commonly found in temperate regions of the Northern Hemisphere but can also be seen in South America and Africa where it occurs in a wide variety of biomes ranging from high-altitude mountains down to the coastal plain.

Sowing an annual crop of clover can make a huge impact on your soil health and is one of the easier cover crops to grow. Very much a “set it and forget it” type crop, once the clover starts growing, there isn’t much work for the gardener to do.

A clover cover crop, such as this scarlet clover, is incredibly beneficial. Source: Michele Dorsey Walfred

First, we should look at this concept of cover crops. What are they? Cover crops are a type of plant that you grow in your garden to cover the soil rather than for harvesting. There are many different types of cover crops that each have their own benefits and drawbacks.

No matter what type you use, there are many benefits to cover cropping. The plant’s extensive root system protects the soil from erosion and digs deep, improving soil tilth. Some plants (including clover!) fix nitrogen in the soil and help suppress weeds. Early flowering crops will bring beneficial insects to your garden when you need them most in early spring.

Most people are familiar with the four-leaf clover symbol and its associated luck, but did you know there are over 300 species of clover? Clover is believed to have originated in Europe but has since spread to all continents except Antarctica.

Closely related to peas, clovers are flowering legumes that can tolerate many growing conditions, ranging everywhere from grasslands, alpine meadows, rainforest, and, perhaps the most well-known, suburban lawns. Other than its use as a cover crop, clover is commonly used as livestock feed, pasture for commercial beekeeping, and forage for a variety of wildlife. Native Americans used the leaves, roots, and seeds for food.

Why Does Clover Make A Good Cover Crop? 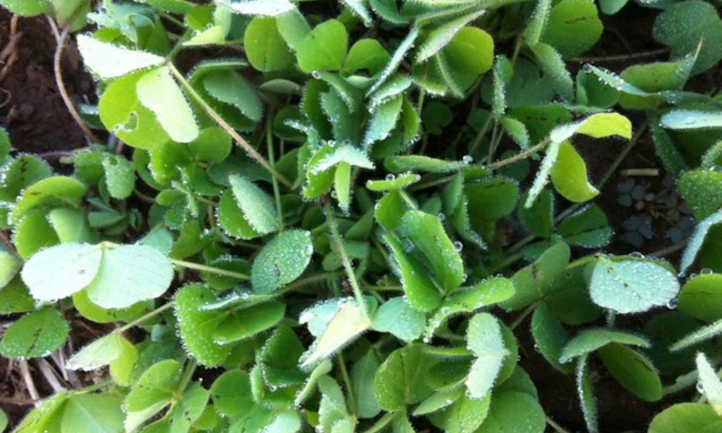 Clover makes an excellent cover crop for several reasons. The first is its affinity for nitrogen fixation. Like many legumes, clover fixes nitrogen through a symbiotic relationship with bacteria in the soil. The bacteria form nodules on the clover roots and take nitrogen from the air and convert it into a form the plant can use. This nitrogen fixation is important for gardeners and farmers because it allows us to add nitrogen near the soil surface without the use of fertilizers or other amendments.

In large-scale settings, clover has been shown to fix as much as 100-200 pounds of nitrogen per acre! The specific pounds per acre changes depending on planting conditions, local climate, and the variety of clover chosen.

The second reason clover works well for cover crops is that it acts as a ground cover and protects the soil from both erosion and weeds. Clover grows quickly and establishes itself in the spring before other plants and newly germinated weeds can, acting as a natural form of weed suppression. The same rapid growth that helps with weed control also helps fight erosion by quickly covering a large area of the garden. If planted in late summer or early fall before the first frost, winter-hardy varieties like crimson clover, red clover, and arrowleaf clover can build soil health and protect from the driving rain and snow of winter.

The third reason that clover works so well as a cover crop is for its use as green manure. The term green manure is used to describe vegetation that is killed and left on the top of a garden bed or turned into the soil. This provides many benefits, such as breaking down and keeping nutrients near the soil surface, acting as a mulch (if left on top), building organic matter, and providing a home for beneficial insects and decomposers.

There are three main ways that gardeners can take advantage of this green manure which will be covered more in-depth in the harvest section below; the “chop and drop” method, tilling the crop into the soil, and using the cuttings in the compost bin.

An often overlooked benefit of cover crops is their ability to bring in beneficial insects. Clover hits their flowering stage earlier than most plants, blooming early in the spring when beneficial insects like native bees, honey bees, and other pollinators need them most. Curating a well-balanced ecosystem of insects within your garden has massive benefits like pest prevention and drawing in pollinators for your other crops. 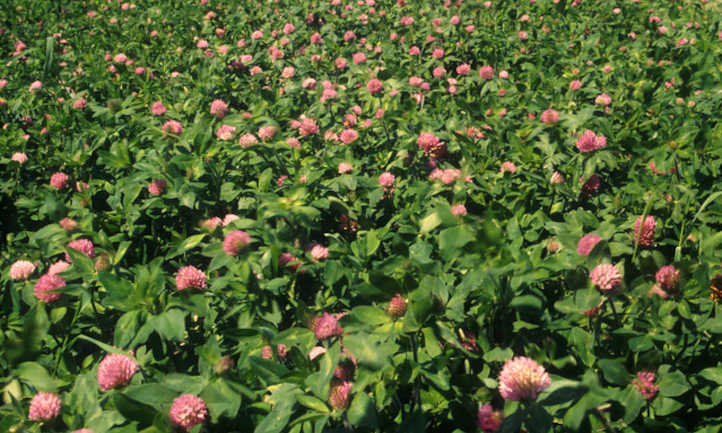 Red clover is excellent at nitrogen fixation and as green manure. Source: USDAgov

There are more varieties of clover than could be reasonably listed here, so I’ll narrow it down to a few that are the most useful and common with gardening and agriculture. Other than the variety you choose, there are two important factors to consider; lifecycle and time of planting.

Clover can be either annual or perennial, depending on both your local climate as well as the variety chosen. Annual types only reproduce via clover seed and need to be re-seeded each year. Perennial clovers also reproduce from seed but become established in one area and regrow each year without extra work. Whether you choose an annual or perennial depends on your needs. Most gardeners choose an annual variety since they’re planting clover as a cover crop and want to completely kill the plant before planting their garden. Perennial clovers work best when grown for livestock forage or permanent erosion protection.

The second consideration is the time of planting. While all clovers are tolerant of cool conditions, some gardeners choose specific varieties like a winter annual clover that will die back with heavy frost and re-emerge in the spring. If planting in mid-May or early summer, choose a variety that can handle hot weather and drought.

Red clover and white clover are both varieties of perennial clover. White clover is the most widely grown variety in the United States, with many people knowing it as the same species growing in their lawns. Red clover seed is larger, and it is easier to collect when performing a harvest of this crop seed. In areas where it is well-established, it can be hard to kill red clover so keep that in mind before planting it as a temporary cover crop. In agricultural settings, a medium red clover stand is usually killed using a roller bar or a moldboard plow attached to a tractor.

Arrowleaf clover is used less commonly by home gardeners but makes excellent forage and hay for livestock. It grows in cold conditions and can quickly cover an area of pasture.

Planting Clover As A Cover Crop 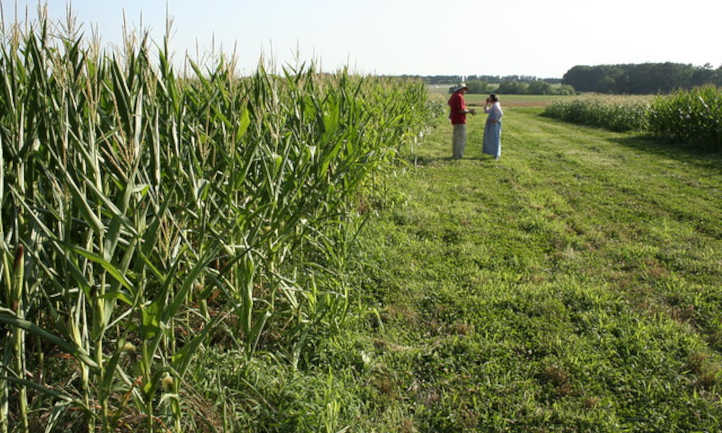 With many varieties of clover crop seeds available and its ease of sowing, planting it is one of the easiest tasks you’ll have in the garden! While generally a hardy plant, there are a few things to keep in mind when planting your seeds.

Clover can be grown virtually anywhere in the garden, but generally prefers well-drained soil that is slightly acidic. The plants will tolerate shade, but grow best, and have maximum nitrogen fixation, in full sun. It can be planted in almost any garden type, performing well in both raised beds as well as in-ground garden plots.

Choose a variety that works well for your climate and planting region. Crimson clover tends to be adaptable to most climates. Red clover grows well in warm climates, while white clover performs better in cooler, wetter climates.

If planting for a summer ground cover, plant in early spring near the time of the last frost. When planting to protect your soil over the winter, plant in late summer when the plants have about 6–8 weeks before the frost date to become established.

Sow the seeds by distributing them over the garden plot with your hand and then lightly rake over the soil. Clover seed germinates best when buried only a little bit, so try not to push the seed deeper than ¼”. Keep the soil moist until the seedlings begin actively growing. Most clovers are quite tolerant to drought but do best with around ½” to 1” of water per week.

Being rugged, well-adapted plants, there are not too many concerns with growing clover. When grown as cover crops, this risk is lessened since it is meant to be cut down before harvest, unlike other plants in the garden. Most issues come from overly damp conditions that set the stage for fungal attacks. Prevent this by planting an appropriate variety for your growing area and avoiding soils that hold too much moisture. For most gardeners, the bigger risk is that the clover will set seed and accidentally re-seed an area of the garden. This can be prevented by careful monitoring of the growth and cutting down or turning in the plants before they manage to seed.

Harvest For The Garden

For its use as a cover crop, there are three main ways to “harvest” the clover. The first is called the “chop and drop” method. It’s exactly as it sounds; you go through the garden with a large pair of shears, string trimmer, or any other cutting tool, and chop the clover down, dropping it onto the soil. It can either be left there as a mulch or buried under a layer of compost or soil. There is also the “chop, drop, and regrow” method where you cut just the top of the plants off, leaving the rest to regrow a second harvest.

The second method entails tilling the clover into the soil. This is common in both agriculture and gardening settings. Using a hoe, tiller, or other digging tools, till the plants into the top layer of soil. They will quickly break down and add nutrient-rich organic matter to the soil.

The last method is similar to the chop and drop technique, but instead of leaving it on the surface of the soil, you take the cuttings and add them to your compost bin. This has the advantage of keeping debris out of the garden, and the compost bin can turn the cuttings into compost more quickly than if you had left them in the ground.

Q: What clover is best for a cover crop?

A: This is largely dependent on your climate and required uses in the garden, but crimson clover is a dependable variety that performs well in many situations.

A: Yes! In most places, clover can withstand winter weather and re-emerge in the spring.

Q: What is the best cover crop?

A: Choosing the best cover crop depends on your climate and your needs in the garden. Each type of cover crop has benefits and drawbacks. 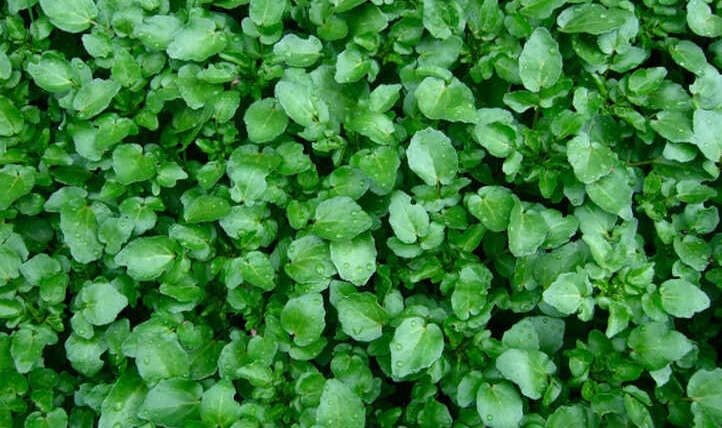 How To Develop Watercress In Your Backyard

Aubergine companion crops to check out