The Mexican hat flower gets its name from the gigantic cone in the middle of the flower, which is said to resemble a sombrero or hat. It comes in a wide range of colors from dark red, reddish brown, and red and yellow. The Mexican hat plant has a very active growing season and blooms from late spring into early fall.

Like so many coneflowers, the prairie coneflower, aka Mexican hat flower, is a great pollinator plant. It’s relatively drought tolerant as well and thrives in the hot and dry climates of the western United States.

The most commonly known coneflower is probably echinacea which is known for its use in herbal teas. Mexican hat plant can be used in teas as well and has also been used as a treatment for poison ivy. Consider adding this coneflower to your pollinator garden, and you’ll be rewarded with an edible herbal tea source as well!

The Mexican hat plant is also known for being deer-resistant and relatively pest and disease free. Known as Ratibida columnifera, it’s a fast-growing plant. The one downside is that it may crowd out weaker plants nearby. Give these wildflowers plenty of space in a sunny spot in your garden, and you won’t be disappointed! They also attract many beneficial pollinators to your gardens, such as wild bees, butterflies, and hummingbirds. 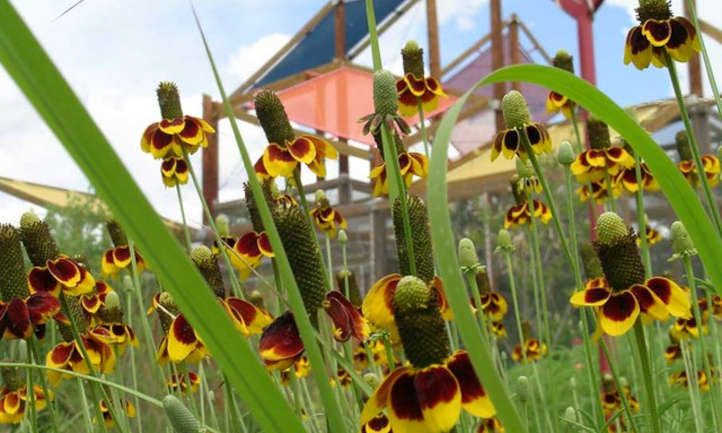 The flower got its common name because it looks like a hat. Source: suziwahoozi

All About Mexican Hat Flowers 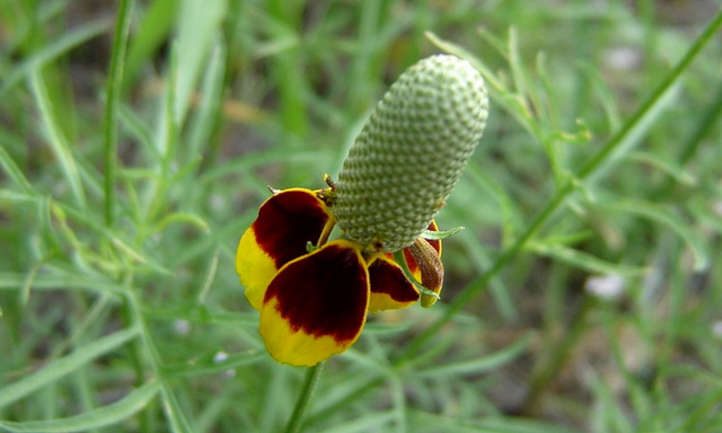 Mexican hat flower (Ratibida columnifera) is also known as prairie coneflower, red-spike Mexican hat, thimble flower, or upright prairie coneflower. Mexican hat plants are native to the great plains of North America from southern Canada to northern Mexico and most of the United States. This perennial plant is in the aster family. People grow Mexican hat for beautiful cut flowers.

The flower heads resemble other members of the coneflower family (like Echinacea), but with pronounced upright seed heads that form from the center of the drooping petals. This long-headed coneflower is supported by slender stems with bright green, feathery, and deeply cleft leaves. This colorful coneflower can range from red and yellow to reddish-brown.

For the best germination results, the Mexican hat seeds require a period of cold stratification. Use a high seeding rate to sow the seed in the fall by broadcasting the tiny seed and then lightly raking the area. In the early spring, water regularly until the Mexican hat plants are established. Their bloom time will vary depending on your region but ranges from late spring, through summer, into late summer and even into the early fall.

Mexican hat plant care is notoriously no to low maintenance making this a great choice for an area of the garden that you’d like to fill without adding another plant care schedule to your agenda. 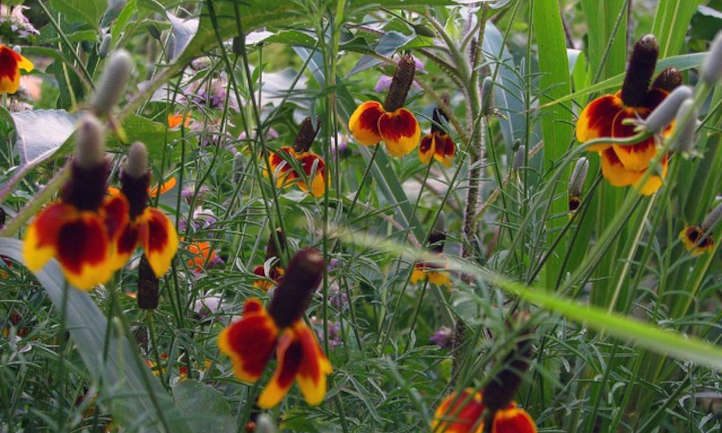 Many Mexican hat flowers among other wildflowers. Source: DaylandS

Red-brown Mexican hat plants thrive in full sun. However, they will tolerate light shade. They make a great option for sunny borders in your cottage gardens. Given 6-8 hours of sunlight per day, this truly colorful coneflower variety will flower profusely. The ideal growing zones for this plant are USDA growing zones 4-8.

Since the seeds need a period of stratification, zones with cold winters allow them to propagate naturally. In zones with warmer winter weather, the cold period can be simulated by placing seeds in the refrigerator for a few weeks before planting.

The ideal temperature range for this plant is between 65-75 degrees Fahrenheit. When temperatures in midsummer begin to trend consistently above 90 degrees, the flowers tend to die back and go to seed. The plants will die back completely at the first sign of a light frost.

If you’d like to enjoy these flowers year-round then you may consider growing them indoors in potted plants. They can be grown in any warm, well-lit indoor setting. However, they are fast growing and may need repotting from time to time. While these plants are particularly drought tolerant, in excessively prolonged periods of heat and drought, they may need some extra moisture. Mulch can be used to help conserve moisture, especially in poor soils, and reduce the need for watering.

It’s best to water these plants either early in the day or later in the evening after the heat of the day has passed. Watering during the hottest part of the day ensures that a portion of the water will evaporate before it can reach the roots. During germination and initial growth in the spring, these plants will require regular waterings.

Once they are established, however, they need moisture less frequently. While these plants are particularly tolerant of drought, in excessively prolonged periods, they may need some extra moisture. Mulch can be used to help conserve moisture, especially in poor soils, and reduce the need for watering.

Watering at the base of the plant with a soaker hose or drip irrigation lines works best. Drip irrigation lines are particularly useful for mass plantings where it may be harder to reach the base of every plant with a hose. Once the plant has gone to seed, you may cease watering altogether. Allow the seed heads to dry on the plant, and then carefully collect your flower seeds for next year!

Mexican hat plants are known to survive in a wide range of soil types. These native plants are generally found in meadows, prairies, roadsides, and other areas with disturbed soils. However, they require well-drained soil since excess moisture can cause problems for this plant. The best growing medium for Ratibida columnifera should be a well-drained, slightly sandy loam mix. Mexican hat plant has no specific soil pH requirements and can survive in neutral to alkaline soils. 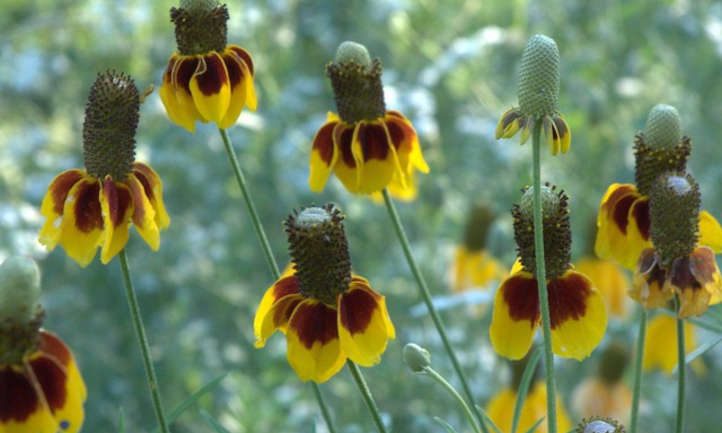 One of the benefits of planting native plants like the Mexican hat plant is that they don’t require fertilizer at all! Not only is Mexican hat plant care low maintenance, requires low water use, and prefers sandy soil, but they also don’t require any fertilizer. Fertilizing your Mexican hat plants won’t hurt them at all; it just isn’t necessary. Plant in a full-sun location with well-draining soil, and you’ll be enjoying Ratibida columnifera all summer long.

You can extend the bloom time of Ratibida columnifera in your garden by pruning back the flower heads or deadheading the spent blooms. This will encourage another flush of flowers. If you don’t want your flowers to re-seed themselves and spread, mow them down after they’ve finished blooming. In the first year of growth, it’s recommended to cut back the spent blooms before they get a chance to go to seed to help the plant focus its energy on establishing roots and becoming naturalized. At the end of the growing season, when the plant has dried completely and died back, it can be cut to the ground.

Mexican hat seed is easy to collect, and one of the benefits of growing this wildflower is an abundant and never-ending source of seeds to share with friends or spread to other areas of the garden. After the flowers have bloomed, each cone will dry and turn into tiny seeds that can be stripped from the cone.

As mentioned above, these seeds require a period of cold stratification so they will need to be planted in the fall for best results. The seeds are so tiny that they don’t need to be planted deeply. The best sowing method is to broadcast a large amount of the seeds over an area of bare dirt and then lightly rake the seeds into the ground. 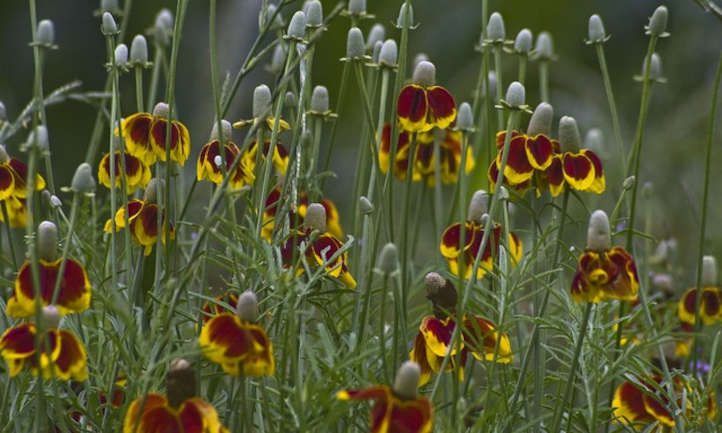 No doubt you’ve chosen to grow Mexican hat plants because they’re low maintenance, drought tolerant, and fast-growing beautiful flowers. There are, however, some issues to be on the lookout for when it comes to this wildflower.

The Ratibida genus has very tiny seeds, which can make them difficult to sow as they can blow away or become disturbed and end up outside of the area in which you want them to grow. They do need light to germinate, so they can’t be sown deeply either to avoid this issue. They can be broadcast across an area of bare soil and covered with a fine layer of vermiculite which will help hold them in place but still allow light to pass through.

If you notice holes in your prairie coneflower leaves and the leaves appear to be skeletonized, then you may have an issue with Japanese beetles. They are copper-black with a metallic blue-green head and are easy to spot and identify. If the infestation is small, they can be hand-picked from the plants and dropped into a bucket of soapy water.

In larger infestations, neem oil can be sprayed on your plants to control the adults. However, Japanese beetles overwinter as grubs in the ground, so in more serious cases, you can treat the ground annually with milky spore powder. The milky spores are ingested by the grubs which then kill them and prevent the next generation from growing into adults. The best time for this type of treatment would be in the fall. Note that it can take a while for milky spore powder to be effective, so this is an ongoing annual treatment regimen.

Aphids are sometimes enticed by prairie coneflower foliage. The best way to battle aphids is to spray them off of your plant with a blast of water as soon as you spot them. To prevent them from returning and/or overtaking your plants, creating an environment that includes a variety of flowering plants will attract pollinators and other beneficial insects that love to munch on aphids, like ladybugs. In more severe infestations, neem oil or insecticidal soaps can also do the trick.

Ratibida columnifera is mostly free of disease. However, root rot issues can arise if the planting site has poor draining soil or if it is suffering from overwatering. They do not like to be in standing water so providing them with well-draining soil will help avoid this issue.

Planting them in the right soil helps too. However, if you notice wilting even though it has received plenty of water, mushy stems, and a lack of new growth, this can indicate rot. Letting your plant dry out completely before watering it again can help starve the fungus. The application of copper fungicides has mixed reviews when it comes to treating root rot. 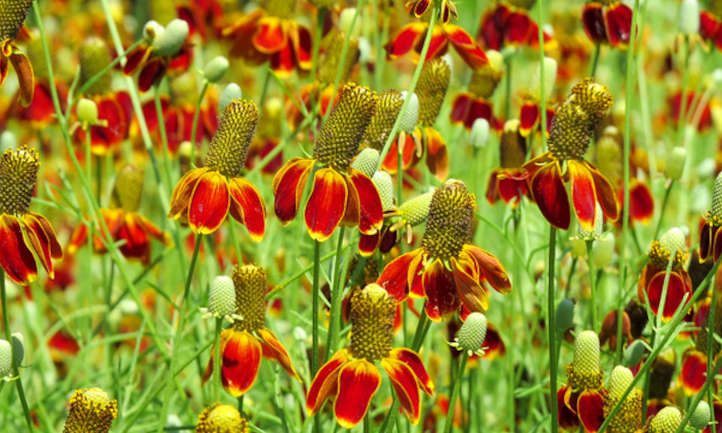 A: Yes, they are perennial and release seed annually for the upcoming season.

Q: What is a Mexican hat flower?

A: A fast-growing wildflower in the aster family.

Q: How do you take care of a Mexican hat plant?

A: Place this column flower in a full-sun area of your garden. Once established it is very low maintenance, drought tolerant, deer resistant, and disease free.

Q: Where is the Mexican Hat flower native to?

A: Mexican hat has a native range in the great plains of North America from Southern Canada to Northern Mexico, including most of the United States.

A: The flowering period will depend on several factors. Watering in the summer can extend the bloom time and deadheading or removing the spent blooms to encourage more flowers. Generally speaking, they will bloom from spring to late summer.

Q: How tall does a Mexican hat grow?

Q: How often do you water a Mexican hat plant?

A: Once established, this easy plant has a high level of drought tolerance and thrives in dry areas. That being said, they will need supplemental water in prolonged periods of drought or extreme heat. Watering about 1 inch per week during dry spells, but be careful not to overwater as too much moisture can also cause issues.

Q: Is the Mexican hat plant a succulent? 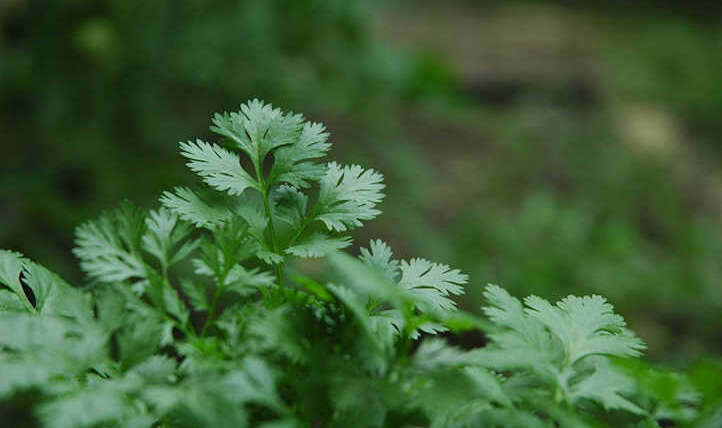 Rising coriander and coriander within the herb backyard 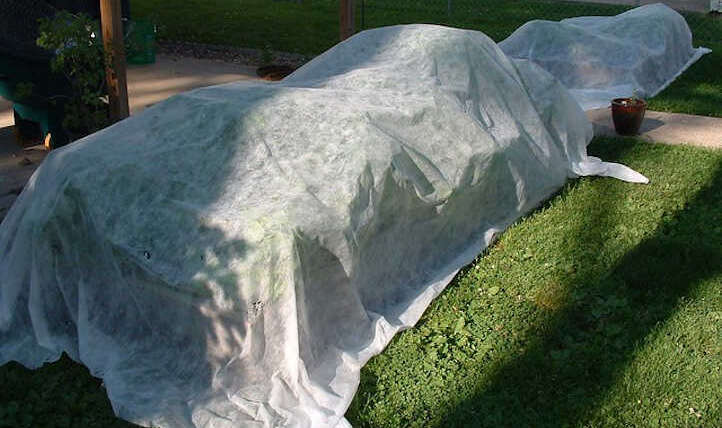