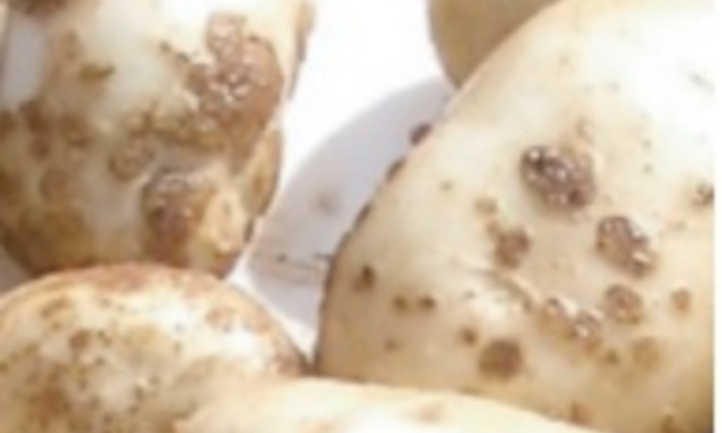 One of the best parts of growing potatoes is the delight of harvesting them after months of waiting for the delicious tubers. Root vegetables are beloved and grown across the world but are also susceptible to different pests and diseases. Often, because the crop is underground, the symptoms are not visible until we pull them out. There’s nothing worse than waiting the entire growth period to learn a disease has stricken the crop. Potato scab, also known as common scab, is one of these diseases.

While the potato scab is not a fatal disease, it is pervasive across the world anywhere potatoes are grown. This bacterial disease impacts a range of vegetables in addition to potatoes such as beets and parsnips. As its name suggests, the potato scab causes dark brown lesions on the surface of these vegetables which greatly diminishes their sale value and marketability for commercial growers. There is no known cure for this disease, but it can be managed through integrated techniques that include crop rotation and soil management. So let’s talk about potato scab, what it is, and what its symptoms are. We’ll also discuss which plants are most susceptible to the disease. Then we’ll talk about control and prevention, so you can enjoy a healthy potato harvest.

What Is Potato Scab?

Potato scab or common scab is a soil-borne disease that can be caused by several Streptomyces species of bacteria, of which the most widespread is Streptomyces scabies. This bacterial disease is related to another scab-causing pathogen, S. acidiscabies, although S. acidiscabies can survive under much more acidic conditions. S.clavifer, S.fimbriatus, S.carnosus, and S.craterifer are also additional bacterial pathogens that can cause scabs on potato tubers.

Environmental Conditions that Cause Potato Scab

Environmental conditions can cause potato scab as well. These conditions, such as soil pH levels and soil moisture, can impact the severity of the common scab infection. There might be several causes behind scab problems in tubers but the potato scab should not be confused with powdery scab. Powdery scab is a fungal disease caused by Spongospora subterranea. This fungal pathogen is entirely different from the bacterial pathogens mentioned above.

S.scabies is an unusual bacteria in that it has fungal-like filaments. It survives in the soil in its vegetative mycelial form or as spores, much like fungi do. It is partial to alkaline soils that exist under sandy or dry conditions. The pathogen spreads through the soil and can also be transported by water or even on insects and nematodes. It can penetrate the tuber surface through wounds, lenticels or raised pores on woody stems, and the stomata, or the pores in leaves, stems, and other plant organs. Once inside the plant, S.scabies releases a toxin that breaks down cell walls and helps it to invade neighboring cells. Eventually, plant cells will die and be replaced by cork cells which protrude to form scab lesions. The pathogen sporulates in the scabs which then repopulates the soil, continuing the cycle.

Potatoes are particularly vulnerable to infections of potato scab during their early tuber development stage. It’s a this point the tubers are more easily damaged or pierced by garden tools. The severity of the infection increases as soil pH increases. The ideal condition for this bacteria is in dry, alkaline soil with temperatures between 20-22 °C.

The potato scab disease results in visible lesions or pits on potato tubers. The symptoms vary depending on the crop variety. The scabs first start as small, raised brown spots with a margin before expanding and taking on a cork-like texture. They are smaller in earlier tuber development that merge and become one larger scab as the tubers mature. As the disease progresses, the scabs become necrotic and sporulation begins to perpetuate the cycle.

What Plants Does Potato Scab Effect?

Potatoes are the main hosts for S.scabies, but other root crops can also be affected. These vegetables include beets, radishes, turnips, carrots, parsnips, and rutabagas. Different Streptomyces species most impact different hosts. For example, S.ipomoeae is most associated with scabs on sweet potatoes and S.tumuli with sugar beets. 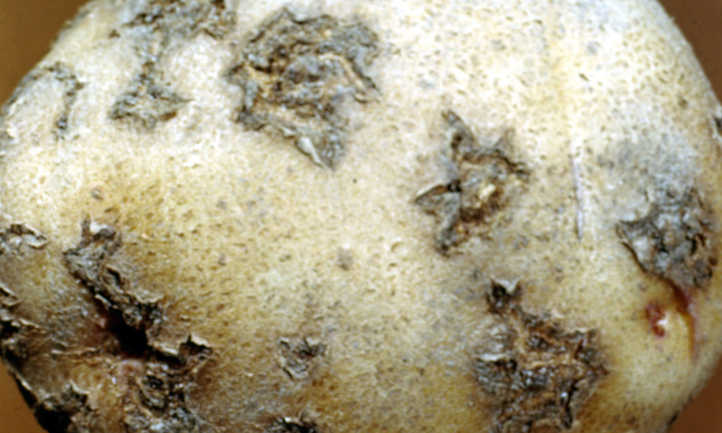 Almost all soils have some population of S.scabies existing within them. Therefore, it is not possible to eliminate this bacteria. Some of the best methods for controlling the S.scabies population is by practicing crop rotation with non-host species like grains and cereal crops. Crop rotation can also help with managing other potato pests such as the Colorado potato beetle. Corn, rye, and alfalfa are a few examples of crops that have been able to control common scab bacteria proliferation in the soil. If you’re worried about potato scab affecting upcoming crops, use crop rotation to assure a better harvest.

Other control measures include managing potato soils. Researchers have found that planting potatoes in acidic soil with pH between 5.0 and 5.2 greatly suppressed the common scab. However, it is important to keep in mind that soil nutrients are typically more plant available when the soil pH is around 6.5. There has also been some research into the use of a single application of ammonium sulphate to lower the soil pH. When considering whether or not to use these methods, try to find a happy medium between each of the metrics listed here.

Maintaining soil moisture especially during the 2-6 weeks following tuber initiation can make a significant difference on the common scab infection rate in potatoes. Potatoes do best with moisture content of 80 to 90 percent. Keeping soil moist and water stress at a minimum during the tuber initiation phase is a key control method. Do not plant potatoes in areas that are known to dry out quickly. When you build your soils, provide materials that retain moisture, and those that help it drain easily. Ensure your potatoes receive 1 to 2 inches of water per week to avoid stress from over or under-watering.

Applying fresh manure can increase the number of crops infected by scab. Streptomyces bacteria are part of the process of breaking down organic matter in soils such as from animal manure so the bacterial population would increase under these conditions. Check with the source of your manure to ensure they’ve allow it to compost long enough before applying it to your garden. If you obtain fresh manure, let it sit at least 3 to 4 months in ideal conditions. Longer is a safer bet. Not only does using fresh manure put your crops at risk of disease, but the intensity of nutrient density in manures can burn your plants and inhibit growth.

Prevent potato scab from spreading in your soil by planting scab-resistant potato varieties or certified disease-free seed potatoes. Infected seed tubers can quickly spread the pathogen, which will remain in the soil for many years. Although scab resistance is not yet well understood, there are some tried and true cultivars such as Superior, Keuka Gold, Lehigh, Pike, and Marcy. Chieftain, Eva, Reba, Andover, and Russet Burbank are also moderately scab-resistant potatoes. 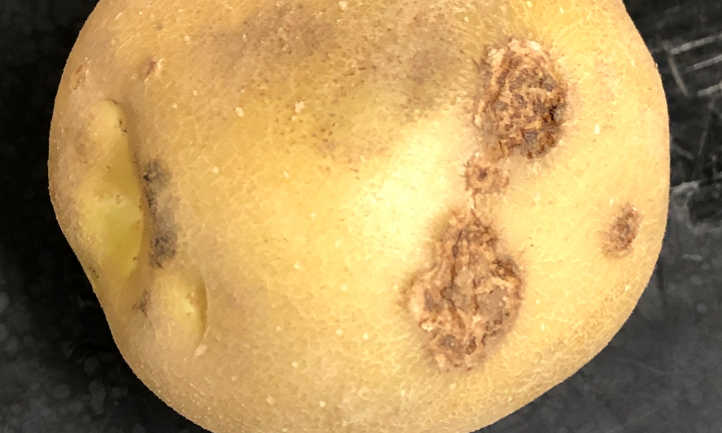 An example of Streptomyces scabies on potato tubers. Source: JasonG1313

Q: What causes scabbing on potatoes?

A: Potato scab or common scab can be caused by several soil-borne bacteria including Streptomyces scabies and a few other Streptomyces species. It occurs most often during initial tuber development. There are other pathogens that cause diseases with similar symptoms.

Q: How do you get rid of potato scabs?

A: The soil bacteria can be found all over the world and anywhere potatoes are grown so it is very difficult to get rid of once it is in the soil. Plant potatoes that are scab resistant or practice crop rotation with non-host plant species.

Q: Is it OK to eat scabby potatoes?

A: Yes, the potato scabs are cosmetic damages on potatoes. They can be peeled away and the potatoes would still be edible. The scab disease causes damage that reduces the marketability of potato crops and other susceptible plants.

Q: Does manure cause scab on potatoes?

A: Manure can exacerbate scab on potatoes because the pathogenic bacteria is more prevalent in environments with high organic matter.

Q: Which potatoes are resistant to scab?

A: Superior, Keuka Gold, Lehigh, Pike, and Marcy are a few of the common scab resistant varieties. 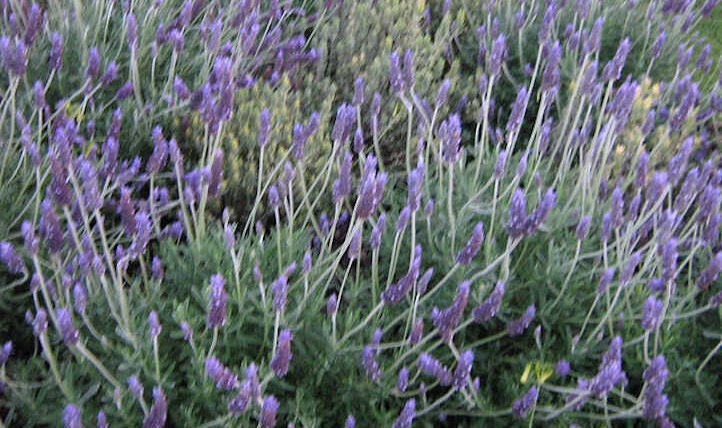 Propagating Lavender: Three Strategies To Use