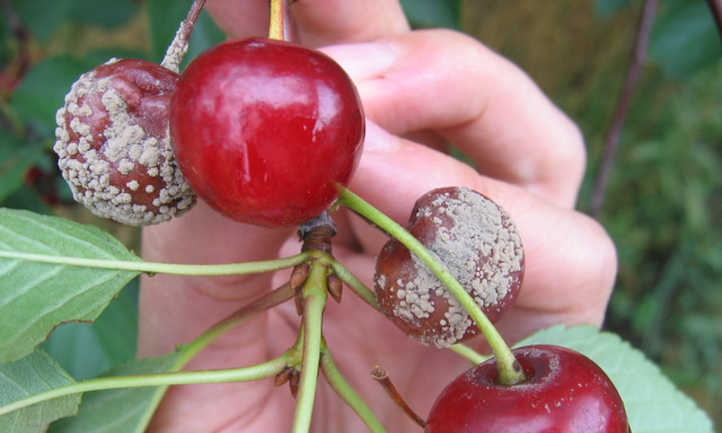 Brown rot is a group of fungal diseases that impact stone fruits and some pome fruits grown worldwide. It’s a problem during the development of healthy fruits as well as a leading cause of post-harvest fruit decay in peaches, cherries, plums, and apricots. Brown rot fungi can be found on young shoots, infected twigs, open or unopened blossoms, and rotting fruit.

Brown rot diseases were first documented in 1796 and went through several taxonomic changes in the past few centuries until they became classified under the new genus Monilinia in 1928. Monilinia contains around 25 species of fungi, with three species that cause brown rot fruit infections:  Monilinia laxa, Monilinia fructigena, and Monilinia fructicola.

As with most fungal diseases, this one is most prevalent under warm temperatures and humid conditions and is the primary reason why farmers use fungicides on stone fruits. Although these three fungi species have different geographical distributions and host fruit species, they are closely related with similar life cycles and treatment options. The control methods in this post would apply to all of these Monilinia species.

Brown rot is not a lethal disease for most plants but has caused significant economical losses across the world through fruit infections. Luckily, it’s been studied by agricultural researchers for hundreds of years who have developed best practices to manage the negative impact of the disease.

What Is Brown Rot?

Brown rot is caused by one of a number of Monilinia genus fungi. Source: NYSIPM

The brown rot fungi are a group of fungal diseases that cause fruit infections and fruit rot. M.laxa is widespread in California and can also be found throughout the U.S. except in southeastern states. It’s also very prevalent in Europe, South Africa, and Chile and is also known as the European brown rot. M. fructicola can also be found in Europe and the Americas but is also found in Japan, New Zealand, and Australia. M. fructigena is also found in Europe and impacts both stone and pome fruits, but is not as devastating as the other two species that can wipe out an entire crop harvest.

Fungal species reproduce via spores. For brown rot fungi, the disease can produce both sexually and asexually through two different types of spores. The fungus overwinters in cankers on twigs or as mummified fruits attached to the tree or fallen on the ground. The warm and wet weather conditions of spring kickstart the disease cycle.

In sexual reproduction, dormant spores in the mummified fruit will form cup structures called apothecia which are around 5-20 mm in diameter. There can be around 20 of these cups per fallen infected fruit and the cups all contain millions of ascospores. Any disturbance to the cups, such as through rainfall, will release the ascospores. These brown rot spores will then infect fruit tree blossoms when they come in contact with flowers or twigs and will germinate as long as the plant stays wet for a few hours.

During asexual reproduction, the cankers on the trees produce asexual spores called conidia that can germinate and infect new plant tissue within 3-5 hours and are transported by wind, rain, and insects. Fruits become increasingly susceptible as they ripen because their increased sugar content will attract more insects which will lead to more wounds. 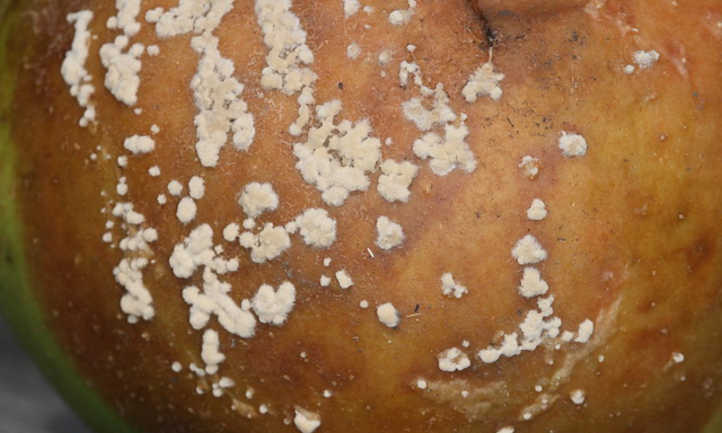 Brown rot fungi symptoms look very similar across impacted plants. Blossoms are susceptible to blossom blight in early spring. Diseased blossoms may wilt, turn brown, or appear covered in conidia spores. Some blossom infections may cause blossom drop while others suffering from blossom blight may remain attached to the stem.

Infected blossoms commonly spread the disease to the stem. As disease development progresses, cankers can develop on the bark that produce asexual spores and cause a secondary wave of infections later in the growing season. These cankers can disrupt the flow of water and nutrients and can result in twig dieback or twig blight.

Young fruits are more resilient to brown rot fungi than mature fruit which can become infected through any injuries or openings caused by weather, handling, or insects. Fruit infections first appear as soft brown spots which can rapidly expand to cover the entire fruit in tan and concentric rings. Fruits may appear to be covered in a gray fuzz, which is a visible sign of the fungal spores. Sometimes, fruits may not even exhibit any symptoms until after the harvest. Infected fruits will eventually dry and shrivel to take on a mummified appearance.

What Plants Does Brown Rot Effect?

Brown rot of stone fruit is a common disease for fruits such as peaches, apricots, cherries, and plums. M. fructicola is considered the most damaging to stone fruit production out of these three species. Brown rot caused by M. fructigena is more common in pome fruits like apples and pears than in stone fruits. 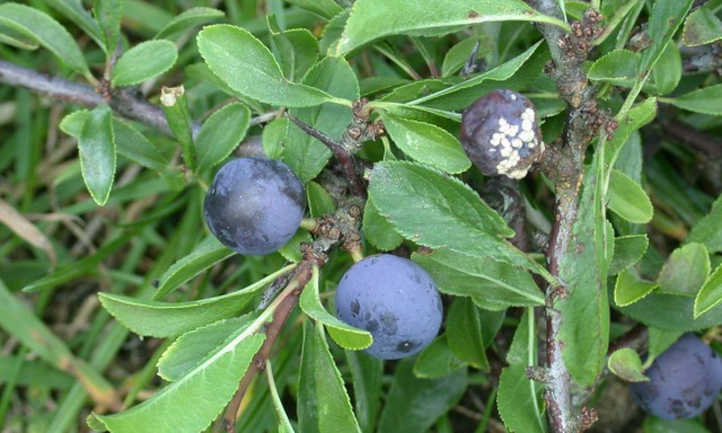 Brown rot is not a lethal disease and can be controlled by pruning and removing cankers on fruit trees during their dormant season in the winter. Make sure to sanitize your equipment between cuts so as to not transmit the disease by dipping the tools in a solution that contains 10% bleach or 70% alcohol for at least 30 seconds.

Insects are attracted to ripening fruit and transmit the disease by creating wounds. You can limit fruit infection by controlling the insects in your orchard through a mix of integrated pest management techniques.

Fruits can exhibit brown rot post-harvest. During the harvest period, it is important to handle the susceptible ripe fruit with care since these fruits are in close contact with each other in storage containers, which can cause the disease to spread rapidly. Refrigerate the fruits immediately after harvest since cold storage will interrupt the disease cycle.

If using fungicides, carefully read the instructions and apply the chemicals following the guidance on the packaging. Fungicides are typically used in two different periods, at the start of the season to mitigate against blossom blight, and again later during the season to control fruit infections. Copper fungicide is the most commonly used against most Monilinia spp.

Sanitation is key in preventing the spread of brown rot. Make sure to take care of your fruit trees by removing any dropped fruit or infected fruit. Neglected stone fruit trees with mummified fruits can harbor brown rot fungus overwinter. Do not compost infected plant material. Remove wild prunes and other potential hosts around your orchard to decrease the reservoir of dormant fungi near your plants.

Make sure to prune fruit trees to improve air circulation in case of wet weather and humid conditions. Thinned fruit can also have a better chance of survival since there is less likelihood for the remaining fruits to touch each other on a branch or rub against branches.

Some peach fruit cultivars are more resistant to brown rot than other stone fruit varieties. If you know that fruit rot is a chronic problem on your property and that infected fruit is likely, consider planting resistant varieties such as Elberta, Glohaven, and Babygold No. 5 as another preventative method. 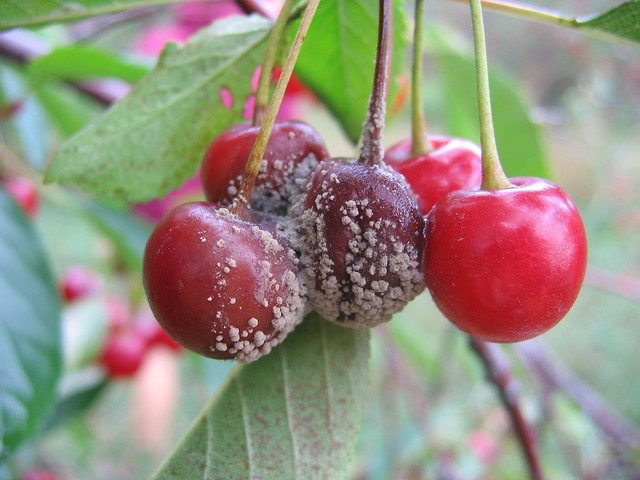 Q: Can you get rid of brown rot?

A: This fungal disease spreads via microscopic spores so it is very difficult to completely eradicate. However, you can remove infected blossoms, twigs, and fruits as well as any other wild hosts near your orchard to manage brown rot infection.

Q: What is brown rot in Australia?

A: Brown rot in Australia is a common fungal disease that causes fruit rot. There are three species of fungi that can cause this disease, but the species that is most likely to be found in Australia is Monilinia fructicola. 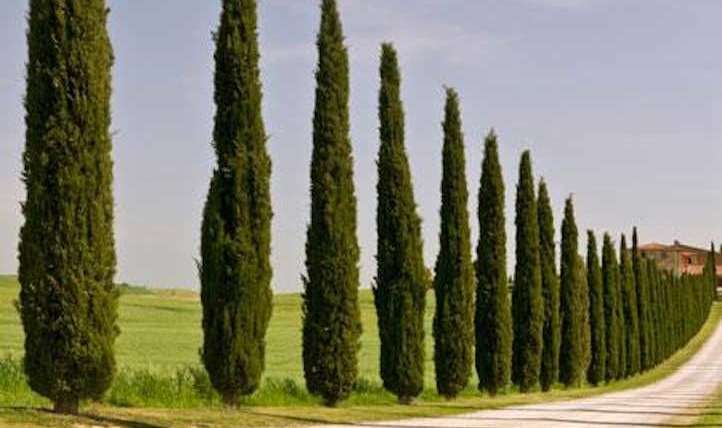