So, what is this stuff? It’s a naturally occurring mineral mined in several places around the world, including the USA, Australia, Brazil, Bulgaria, and Zimbabwe—it can be found on nearly every continent! Horticulturists and hobby planters alike love this stuff because it’s sterile, expands as it absorbs water, and helps soil retain water, meaning your plants’ roots stay moist longer, and you don’t have to water as often. It’s also used in other industries, such as construction and vehicle production.

You may have heard at some point that vermiculite isn’t safe for any growing medium. It was once hazardous due to a specific mine, but you don’t have to worry these days—there are processes put in place to prevent contamination, making vermiculite perfectly safe to use in your soil and even in your home. Let’s get into it so you can learn how to make use of this in your garden! 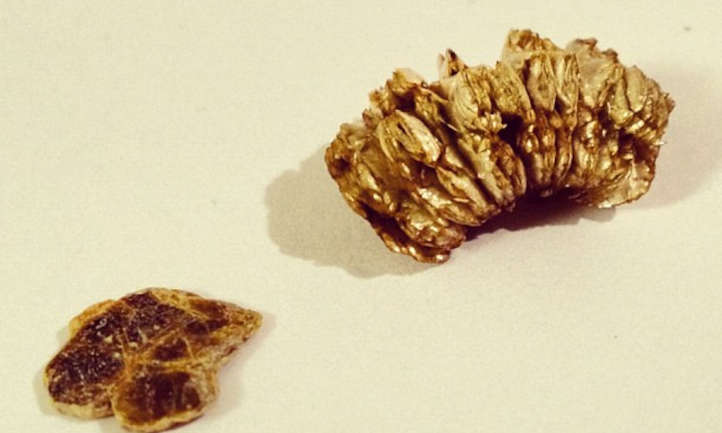 Here, you can see the many layers in vermiculite. Source: kara brugman

Vermiculite is a sterile mineral that’s mined from the earth and treated to be used in different ways, depending on the industry. It’s always a shade brown regardless of its form, but the kind used in building soil structure is usually a golden or greyish brown that blends in with the soil well and can be difficult to spot when it’s mixed with soil or compost.

After vermiculite comes out of the mine, it undergoes different treatments based on the way it’s going to be used. When it’s going to be used for plant growth in gardening and farming in a growing medium or potting mix, it is treated with heat to make it exfoliated vermiculite, which is expanded, to make it absorbent and lightweight with a neutral pH. Expanded vermiculite is the kind you’ll see in garden soil. It will look a bit like worms rather than the flakes it used to be when it was in the mine.

Vermiculite is used for moisture retention and is often found in soil mixes made for vegetables (even root crops), tropical plants, or in those that offer moisture control. Unless a plant needs dry soil, you can assume that most plants will benefit from vermiculite. You can definitely have too much of it in a growing medium, so you have to be careful when using it, even in heavy clay soils.

What Is Vermiculite Made Of?

Simply put, vermiculite is a naturally occurring silicate mineral. It’s a completely natural, sterile, non-toxic mineral that comes from the earth, so it’s safe to use in organic gardening and doesn’t contain any chemicals that would harm your organic gardening efforts. Some mistakenly think the bits of vermiculite they find in their potting mix is little styrofoam balls. That isn’t the case.

Since vermiculite is found in the earth, it has to be mined. There are several mines around the world that contain vermiculite. It comes from mines in the US, so you’ll probably find “made in the USA” vermiculite, but it’s possible to get it from other countries.

What Is Vermiculite Used For? 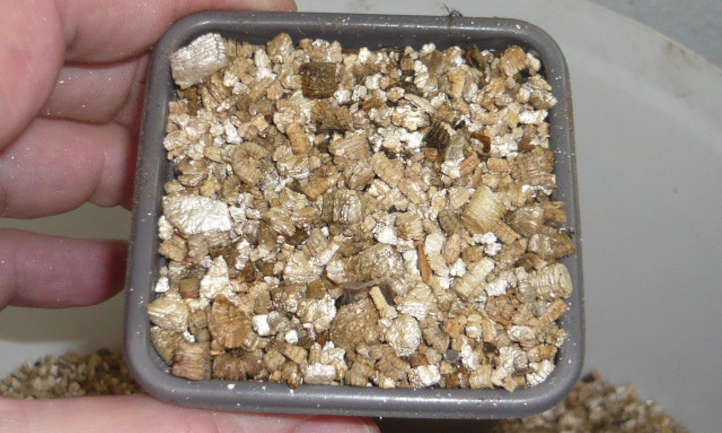 Vermiculite can be used to keep the surface of soil moist. Source: brianpettinger

Vermiculite acts like a sponge that soaks up water, expands, and slowly releases the water as the soil dries out. Needless to say, vermiculite is used for water retention or to keep plants watered.

Vermiculite shouldn’t be used for plants that prefer to dry out between waterings. Since it can absorb up to four times its weight in water, it can negatively affect soil aeration and change the soil structure, causing roots to get waterlogged in the growing medium and develop root rot. It’s great for plants that like damp soil, but you wouldn’t want to use it for cacti or other desert plants.

Vermiculite uses outside of gardening are many that you may not be aware of. You may have it in your attic as loose-fill insulation if you have an older home since modern homes usually use fiberglass. The properties that vermiculite as insulation has are also utilized in building safety to prevent burning buildings from collapsing. It’s used to reduce greenhouse gas emissions in kilns, furnaces, and wood-burning stoves as well.

Vermiculite is also used for concrete screeds. The fine particles of vermiculite are light, insulate the concrete, and provide some fire resistance. In that same vein, it is used to make “logs” in gas fireplaces.

Some of these uses require vermiculite to be treated in such a way that it wicks away water rather than absorbs it. If you want to use vermiculite for plants, to improve moisture retention, be sure you get a variety of vermiculite that’s intended to be used in the garden, horticultural vermiculite, or you’ll end up doing more harm than good to your plants!

You may have heard that vermiculite contains asbestos which is dangerous for your lungs and your plants’ roots. Don’t worry—that’s outdated information!

The only chance you have today of coming into contact with toxic vermiculite is if you find an old bag of it from the 20th century that was mined and produced in the Libby mine. Most likely you won’t come across one of those, so there’s no need to be fearful.

Although pure, uncontaminated vermiculite is non-toxic and perfectly safe to use in your garden, there are a few safety measures to take to prevent irritation. Dry vermiculite may create a cloud of dust—it’s a mineral that came from the earth, after all! Breathing in the dust may cause temporary irritation, like sneezing. The dust may also irritate severe allergies or asthma. You can wear gloves and a mask to prevent any irritation.

How To Use Vermiculite For Gardens 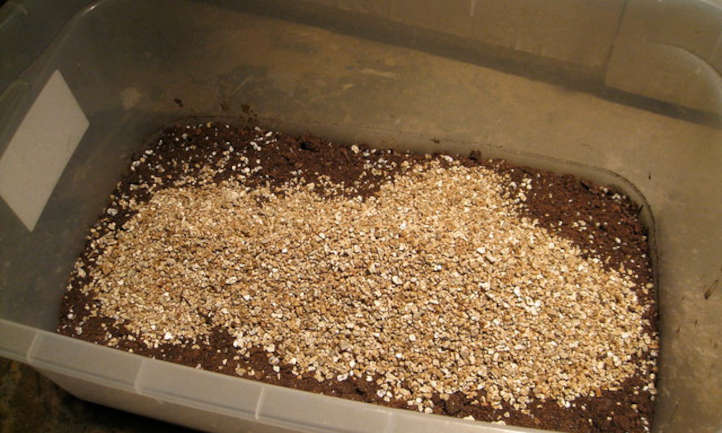 There are several ways you can employ vermiculite to retain water, which is important since proper moisture allows plants to absorb nutrients like calcium and potassium. It’s certainly something you’ll want to keep in your supply shed!

You can combine vermiculite with other soil amendments for seed germination. Mix half vermiculite with half peat moss or compost to keep the moisture and nutrients in check while your seeds germinate. It’s also a wonderful inclusion to your homemade potting mix or preferred material or growing medium. If you’re working with heavy soils, add more vermiculite to lighten them.

Vermiculite is also good to use when you transplant new seedlings and young plants. Retaining moisture is key to keeping growing plants healthy while they develop strong root systems. When you move seedlings to their new spot in the garden, providing them with vermiculite and a weak fertilizer solution will help the soil stay moist as they transition to their new micro-climate. Using it and more perlite is a great way to improve drainage as well.

Vermiculite isn’t just limited to garden use. You can apply it to your lawn after you plant grass seed to help keep the soil moist. This is especially important if you live in a hot climate or have a yard that receives full sun since this will cause the ground to dry out quickly. You won’t need to water as much if you’re generous with vermiculite.

If you want to breed worms directly in garden beds, vermiculite is excellent for soil aeration as well. This benefits worms as well as seedlings, and seeds in seed starting too. Because it retains water, it brings in worms that consume soil nutrients and create castings in the process. 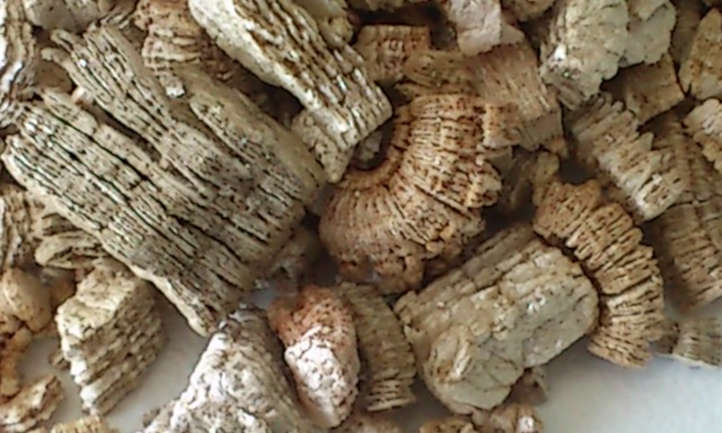 There are different grades of vermiculite that serve different purposes in gardening. Coarse vermiculite has larger chunks and allows for better soil aeration. However, the water retention won’t be the best. Many people use this kind for hydroponics or for plants that don’t like soggy soil.

Medium-grade vermiculite is good for cuttings. It holds plenty of water but allows air to circulate, which is necessary for plant roots to develop and grow. You can put a cutting into a container of medium-grade vermiculite until the roots develop to promote anchorage, and then you can move it into soil, mixing the original media with the nutrients in the current one.

Fine grades of horticultural vermiculite are typically employed for horticultural use, and added to soil mixes with other materials, but keep in mind that the small granules don’t provide good aeration. Perlite can be used to help aerate the soil if needed. You can check out our article about vermiculite and perlite to learn more about how each one works.

When it comes to germinating seeds, and other seed starting practices, use fine vermiculite. Any coarser grades can make it difficult for seeds to push through. Mixing fine grade vermiculite with perlite, and peat to provide nutrients and water retention is an excellent way to start seeds.

If you’re not sure which grade you need, the medium grade may be the best vermiculite to use since the water and nutrient retention and soil aeration is pretty even. It’s good to use for potted plants since it allows the roots to “breathe” but will also keep them moist. 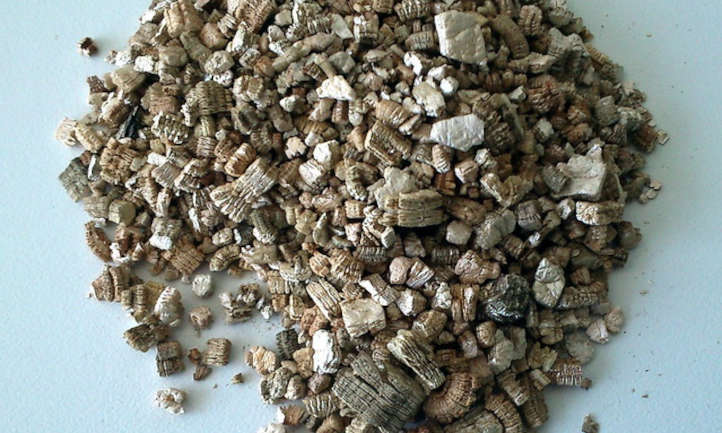 Q: What are the dangers of vermiculite?

A: Vermiculite is perfectly safe to use in your garden. There were once concerns with asbestos, but this was due to a specific mine in Montana that had a deposit next to the vermiculite. Today, vermiculite production has safety measures in place to test to make sure it’s safe.

Q: What is difference between perlite and vermiculite?

A: Perlite is lightweight and is used to aerate the soil to provide better drainage. Vermiculite soaks up water and becomes heavy to help the soil stay moist.

Q: Is vermiculite poisonous to humans?

A: No, vermiculite is not poisonous to humans. Dry vermiculite may create dust that can be an irritant if you breathe it in or get it in your eyes.

Q: What is a good substitute for vermiculite?

A: Vermiculite in soil is used to retain moisture. Substitutes that will also do this include sphagnum peat, coco coir, or pine bark.

Q: What does vermiculite do for potting soil?

A: Vermiculite and perlite both help with moisture control by soaking up water and slowly releasing it as the soil dries out. It keeps the potting soil moist for longer periods of time.

Q: Is there still asbestos in vermiculite?

A: Is vermiculite asbestos, or does it contain any today? No. Vermiculite obtained from a Montana mine in the 20th century was contaminated due to a deposit in the mine. Today, the vermiculite production process tests to make sure it’s all clean and sterile before it’s sold in stores.

Q: Can I use sand instead of vermiculite?

A: Sand isn’t a good substitute for vermiculite as an additive or soil conditioner in gardening because it allows water to drain easily. Vermiculite helps provide more moisture for plants, so you’ll want to use something like peat that will behave similarly.

Q: Is vermiculite the same as peat moss?

A: Peat is a plant and vermiculite is a mineral, but both hold water to make the soil stay moist for longer. 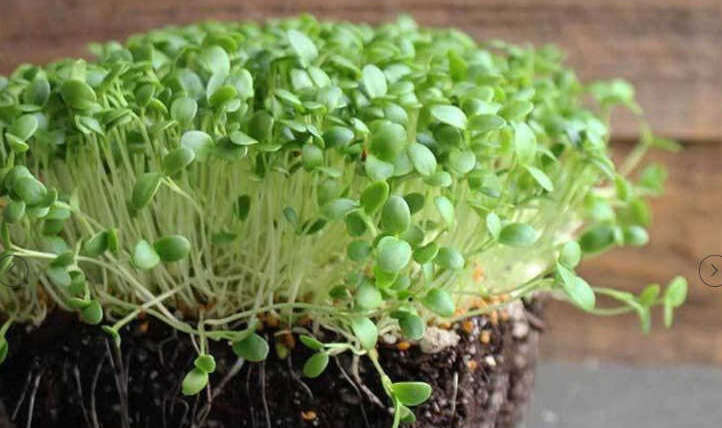 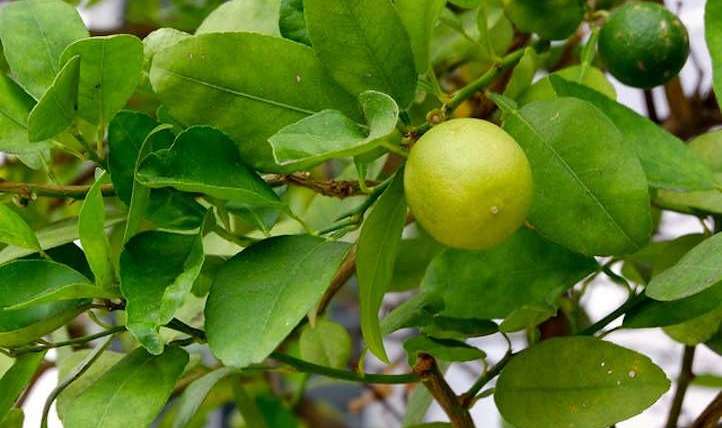