Apple scab (Venturia inaequalis) is one of the most economically damaging diseases for apple growers worldwide. In parts of Australia and Asia, this disease is also more commonly known as black spot disease. This fungal pathogen particularly thrives in areas with cool temperatures and wet spring weather. Although the geographic range of apple scab is widespread and in all parts of the world apples are grown, this disease is most severe in temperate climates.

Apple scab is characterized by defoliation of the host trees, which can significantly weaken their overall vigor and fruit production. In addition, apple scab renders fruits unmarketable as it causes fruits to crack and opens the plant to secondary infections from other pathogens or pests. This pathogen results in more losses than any other plant disease that impacts apple cultivars. In addition to apples grown for fruit, apple scab also impacts ornamental crabapple trees and mountain ash. For ornamental plants, their defoliation would negatively affect the overall look of these cultivated spaces.

The primary control methods for this disease are using cultural and sanitation practices in conjunction with some fungicides for commercial growers. The timing for the application of fungicides is critical as fungicides are preventative for the disease and not a treatment. Finding the best organic fungicide that does not adversely impact the health of the trees or beneficial insects continues to be a challenge.

What Is Apple Scab? 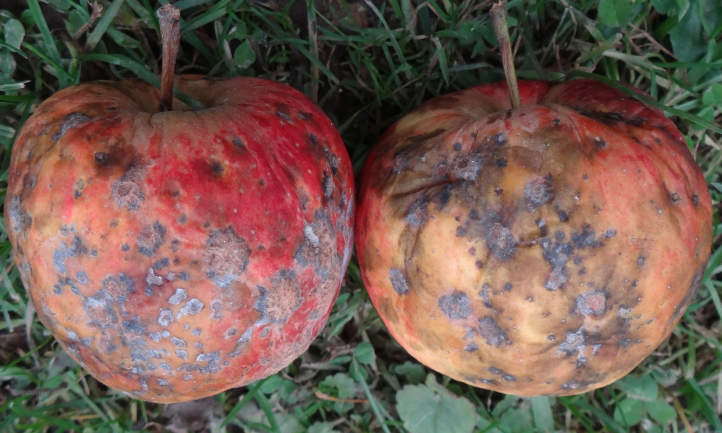 Apple scab is a disease caused by the fungus Venturia inaequalis. This disease causes defoliation and lesions on the leaves, stems, blossoms and fruits of affected plants. V.inaequalis undergoes both sexual and asexual reproduction. The word “inaequalis” in its scientific name refers to the unique and unequal “footprint” shape of its sexual spores or ascospores.

The apple scab fungus overwinters on the fallen leaves and fruits of infected trees. During late spring and early winter, the fungus produces black erumpent pustules that kick starts the disease cycle by creating and emitting sexual spores (ascospores). The start of its sexual reproduction disease cycle coincides with host trees breaking domancy. Wind and rain carry these spores to infect newly emerging leaves and nearby trees. Scab lesions start to appear within 10 days of infection and there is only one sexual reproduction cycle per year.

Over the course of the summer, V.inaequalis sporulates repeatedly on leaves and further spreads the disease to other parts of the plant and to its neighbors. These secondary sporulations are the result of the asexual reprodcution of conidia spores. Clusters of conidia spores give the lesions a velvety brown or olive green appearance. Some 100,000 conidia spores can be found on one lesion!

Both types of spores require moisture to germinate and leaves or fruits must stay wet for a number of hours in order for an infection to occur. The length and severity of apple scab infection periods and the disease development depend on temperature, moisture, health of the host tree and and the ages of the leaves. Lesions spread less quickly on certain apple cultivars than others, which provides them with some levels of resistance to this pathogen. 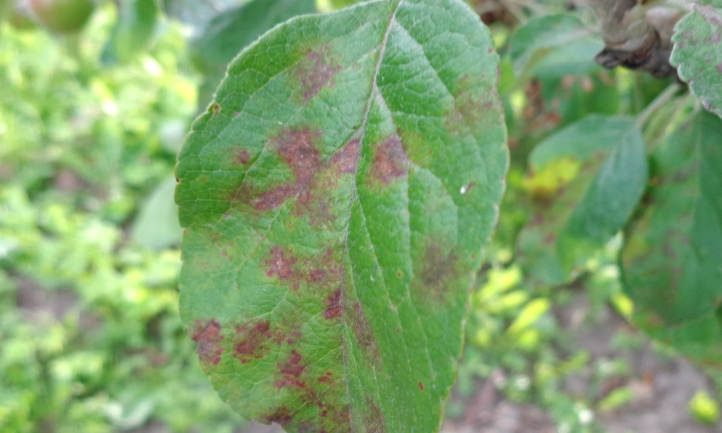 This disease first appears in early spring on the bottom of young leaves as a fuzzy and undefined patch. Many people mistaken apple scab for mold or even just natural fuzz from the leaf. However, overtime, the fuzz becomes olive green spots and then more visibly brown lesions and eventually, turning them yellow and causing leaves to drop. Defoliation of severely infected leaves is a key symptom of this disease which has detrimental effects on the health and growth of the infected tree, especially newly transplanted young trees.

Lesions can also appear on fruits although it is more unlikely for developing fruit to drop as with the leaves. Overtime, small lesions take on a defined border and a corky look. Lesions may lead to cracking on fruits. Primary infections from apple scab can open the fruit or leaves up to new infection from other diseases or pests. Sometimes, late seasons fruits will also not show visible symptoms of apple scab until they are in storage.

Another apple fungal disease, cedar-apple rust, can also cause lesions on infected leaves. However, these lesions are yellow with a dark center. The dark center is where you can see the fruiting bodies of the fungus. Diseased leaves of host plants that are impacted by apple scab will look very different.

Infections can also lead to lesions and openings on twigs. These openings are entry points for other diseases like the apple canker fungus.

What Plants Does Apple Scab Effect? 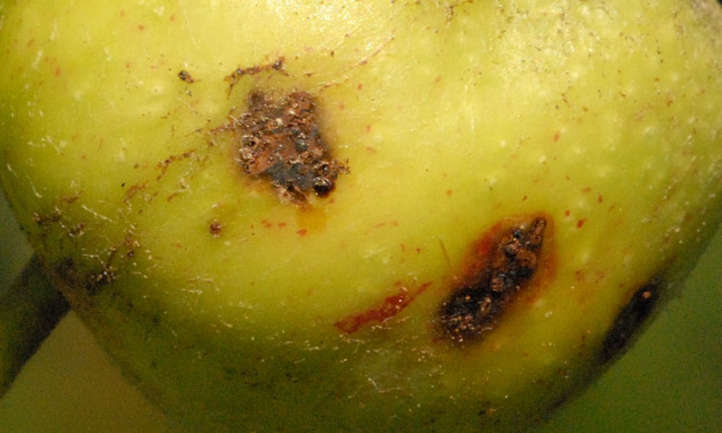 Many apple and crabapple trees (Malus spp.) are susceptible to this scab. Specifically, popular varieties such as McIntosh, Cortland and Honeygold are very likely to be infected.

As with many diseases, effective management of this scab requires a combination of techniques including cultivar selection, chemical controls, and cultural controls, as well as proper sanitation techniques. The good news is that apple scab rarely kills trees, except in the cases of very young trees that are experiencing multiple, major defoliations. An apple scab infection can take 1-2 years to get under control once it’s taken a hold in your orchard or garden.

Because apple scab is a fungal disease, it thrives in damp conditions. Leaf wetness is required for the spread of apple scab. Some cultural practices that can help include selecting a planting site that has at least six hours of sunlight per day so apple leaves have time to dry off. Do not use overhead watering so the leaves can’t get unnecessarily wet. In addition, pruning apple trees can improve the airflow around leaves and fruits. Remove suckers and water spouts to keep the canopy open. Pruning is also a frequently used technique to improve the overall vigor of fruiting trees and to increase the size of the fruits.

Sanitation is very important when managing apple scab and to minimize the spread of the fungal spores to protect healthy trees. Remove fallen leaves if possible and these leaves can be composted. If it’s not possible to rake up all the fallen leaves, try to speed up the rate of leaf decomposition by mulch mowing or flail mowing over them and adding a nitrogen source like a 5% urea solution to speed up the process. Apply urea in late fall and after the last leaf drop as to not stimulate more leaf growth on the tree during the winter. This might make the trees more vulnerable to winter injuries.

Organic apple growers plant resistant varieties to limit the impact of the apple scab fungus and the use of chemical controls. However, many non-organic growers will use sulfur fungicides to manage apple scab. Time is of the essence and the success of the growing season depends on catching the problem early. Start spraying fungicides in early spring to the green tip of buds when healthy tissue first becomes susceptible to pathogens. Spray according to the instructions on the bottle on a schedule of around 7-10 days until petal fall. Fungicides that are commonly available to the home growers work as a protective barrier around the surfaces of the plants which makes it necessary to continuously apply, especially after wet periods. Reading the fungicide label is very important because some chemicals should not be applied for a period of time leading up to the harvest. 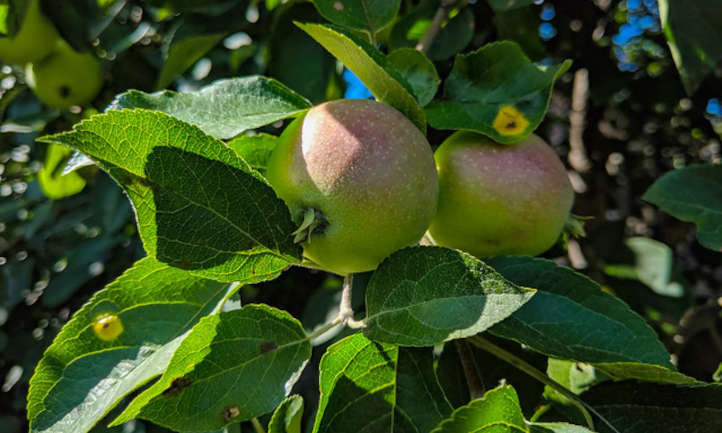 Finding a suitable organic fungicide has been a big challenge for farmers and researchers worldwide. Only sulfur and lime sulfur have been approved for organic use. However, the negative impacts of lime sulfur on apple trees have been widely documented. Specifically using lime sulfur can cause immature fruit drop, phytotoxic burns on fruits thus lowering fruit quality, russeting of leaves, and lower photosynthesis of the plant tissue overall. Elemental sulfur has been documented to harm beneficial insects, like predatory mites, that help to control other pest populations.

While a home gardener might be able to apply fungicides on a small scale to a young tree, you might likely need to contact a certified arborist to spray large, established apple trees, especially if you have many of them. Reach out to your county’s extension office for more information and recommendations.

Q: Can you eat an apple with apple scab?

A: Fruits with apple scab are still edible although it is not typically marketable.You may not want to eat an infected fruit with apple scab because the scab disease results in wounds in the fruit tissue that opens them up to secondary infection by other diseases and pests. Apple scab diminished fruit quality and is a serious disease for commercial growers worldwide.

Q: When should I spray my apple tree for scabs?

A: Fungicides can be sprayed on apple trees at the start of the growing season, when the leaves are just emerging. Be sure to follow instructions on fungicide sprays to best prevent apple scab.

Q: Why do my apples have scabs?

A: Apple scab, Venturia inaequalis, is a fungal disease that is spread by apple scab spores. There are many cultivars of apples that are susceptible to this disease and wet weather conditions can also exacerbate its spread.

Q: When should apple trees be pruned?

A: Following spacing guidelines at the time of transplantation to not overcrowd plants. Prune apple trees during the winter time and while they are in dormancy. Make sure to sanitize all garden tools before pruning and in between plants to minimize disease transmission.

Q: Which fungicide is best for apple scab?

A: Fungicides that can be used to treat apple scab include captan, mancozeb, copper-based fungicide products (e.g. copper hydroxide), myclobutanil and tebuconazole. These are not organic fungicides. The only fungicides that are approved for organic use for apples are sulfur and lime sulfur. Fungicide applications must occur before an infection. You may need to use this apple scab management technique if there is a history of high disease pressure and there are many previously infected trees.

A: No, neem oil will not be an effective treatment for infected trees. There was a study published in the journal HortSciences that examined organic alternatives to conventional fungicides to prevent apple scab. The researchers compared conventional funcides with neem oil and Bacillus subtilis (BS). They found that the neem oil treatment did not help with the apple scab infection and may actually have negative, non-target impacts. BS actually resulted in higher insect damage than the control trees. 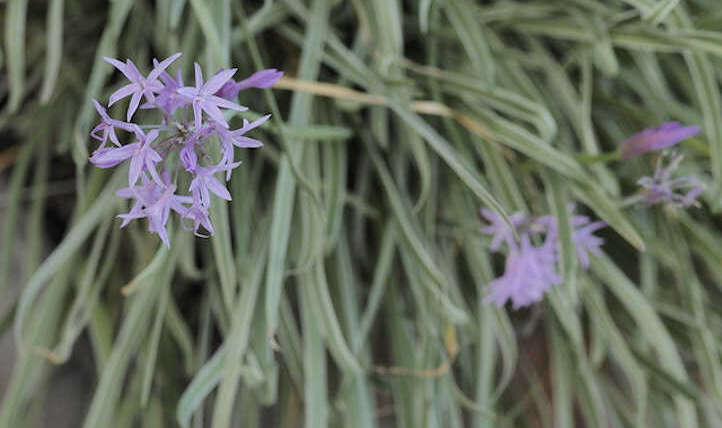