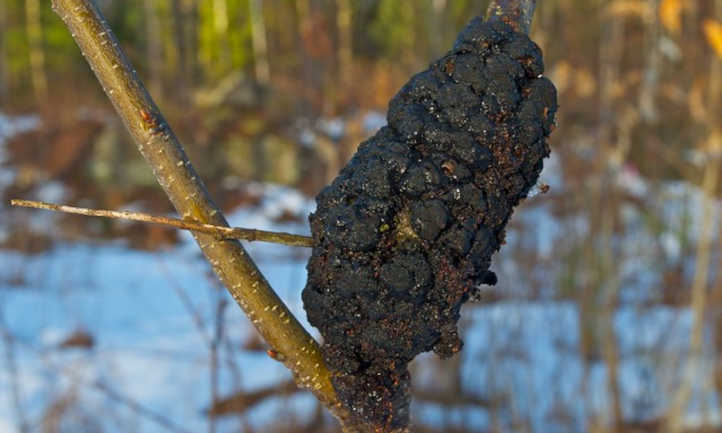 The black knot fungus, Apiosporina morbosa, is a plant disease that affects species from the Prunus genus of trees and scrubs. This disease creates large black galls and cracks on trees – causing significant economic damage to stone fruit crops, ornamental plants, and the timber industry. The wounds also create opportunities for many other diseases to enter the plant and cause secondary infections.

This wood decay fungi is indigenous to North America and common throughout Canada, the U.S., and Mexico. There has been one reported case of black knot in Taiwan in the 1970s and this disease is considered an EPPO A1 quarantine pest internationally.

Black knot appears on the woody parts of trees such as on young green shoots, twigs, limbs, and trunks. It is one of the most visible of the stone fruit diseases as infected trees will exhibit large black knot galls that might ooze sticky liquid and completely encircle infected branches. Severely infected trees are removed to limit the spread of fungal spores to nearby healthy trees. Like other fungal diseases, once established, this disease is hard to eradicate. Monitoring trees and frequently pruning diseased branches are key strategies to manage black knot in plum and cherry trees.

What Is Black Knot Fungus?

Black knot, the common name of this fungus, is the symptom of the disease. The black knot causing fungus Apiosporina morbosa is in the Venturiaceae family and closely related to the fungus that causes apple scab.

The fungus forms fruiting structures on older black knot galls which continue to produce and release spores every year to prolong the disease cycle. Like other systemic plant diseases, this one can also travel throughout the plant, causing new fungal growth some distance away from the initial site of infection. It is one of the most common plum tree diseases, and also one of the most common cherry tree diseases, among other species.

The telltale sign of black knot galls appear late in the growing season, many months or even years after initial infection in the early spring. Often, the black knot galls become visible after leaves drop in the fall.  Infected branches may show some initial swelling that can easily go unnoticed. After about a year of infection, the swelling can take on a velvety olive green covering and begin transitioning into light brown swellings. The older knots enlarge over time as the fungus grows inside the plant tissue. Black knot galls can vary in size from under an inch to over a foot long. Over time, healthy wood will transform into large hard black knots, which might cause leaves and branches to die. Open wounds and cracks caused by the disease on infected trees invite new infections such as other wood decay fungi.

Many Prunus trees are susceptible to the black knot disease including around 25 wild and cultivated Prunus species. Black cherry (Prunus serotina) is a prized timber species native to North America. Damage and wood rot caused by insects, wounds, and diseases significantly impact the market value of this hardwood which makes the black knot fungus a particularly troubling disease for the timber industry. Many ornamental and fruiting cherry and plum trees are susceptible as well, including the American plum (P. americana), chokecherry (P. virginiana), and European “Stanley” plum (P. domestica), to name a few. 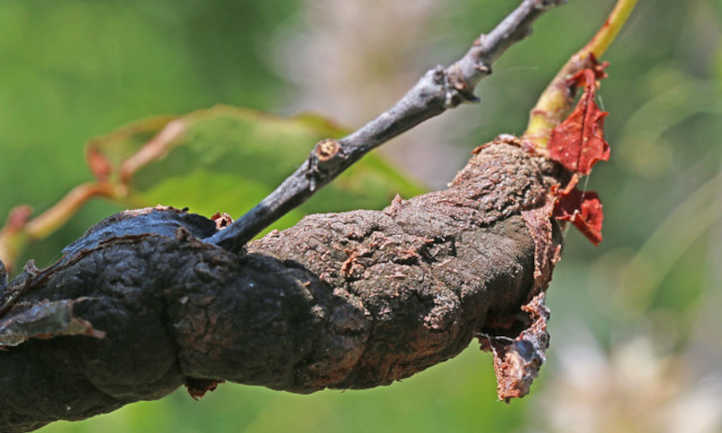 Because old knots are visible on trees, removing infected twigs or branches is a key control strategy. Carry out this process in the winter as trees are dormant then and the lack of leaves makes black knot galls easy to spot. Cuts should be made 4-6 inches from woody galls on twigs. When working on larger branches, make sure to leave at least one inch of healthy plant tissue from where you have removed the existing galls and fungal tissue. Use clean pruning tools and best practices to promote healthy regrowth over the pruning wound. Sterilize tools using a solution of at least 70% rubbing alcohol. You may need to consult an arborist to carry out more extensive removals.

If left uncontrolled, the knots will expand to cover the entire tree and the whole tree might need to be cut down. This might be a multi-season project since any visible black knot indicates that an infection is at least a year old. 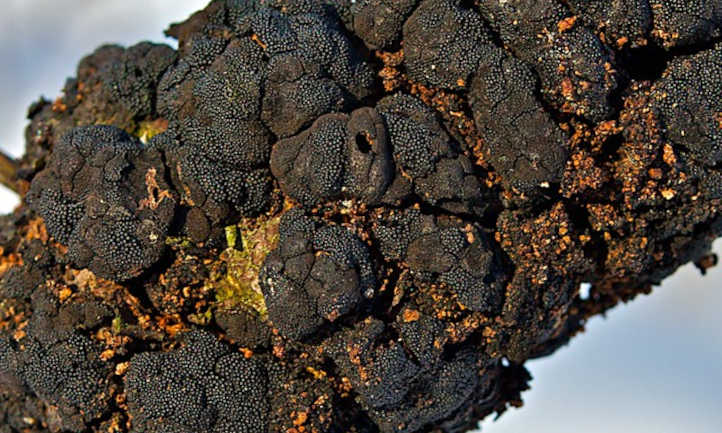 Copper fungicides can also be used to protect trees and young plants from late fall into late winter (roughly Thanksgiving, Christmas, and Valentine’s Day treatment times). A preventative spray of lime sulfur can also be applied when the trees are in dormancy. Do not use these sprays after flowers bloom or before the rain.

Some Prunus species are less susceptible to black knot disease. For cherry trees, sour cherry (P. cerasus) and Nanking cherry (P. tomentosa) are a few examples of cultivars that are less affected. Flowering almond (P. triloba) and apricot (P. armeniaca) are also rarely affected. There are even black knot-resistant plum and cherry trees available on the market such as the beautiful Flowering cherry (Accolade) and President plum. Consider growing one of these varieties, as sour cherry black knots or Nanking cherry black knots are less common and that slight improvement in susceptibility can offer significant protection.

Wild plum and native plum and cherry Prunus trees can host the black knot fungus and act as a reservoir where the fungus overwinters. Consider removing these wild plants or keep a close eye on them to mitigate against the spread of the black knot disease to other trees. 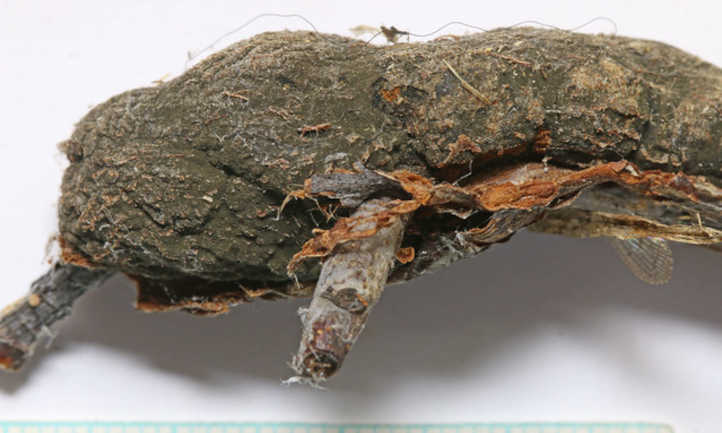 A gall after sporulation has concluded. Source: AndreyZharkikh

A: Black knot fungus is a disease that can be controlled but is very difficult to cure once an infection has taken hold. Severely diseased trees should be removed.

A: Yes, it is recommended to burn the plant material after pruning since the fungus can remain dormant on debris or in the soil.

A: Black knot impacts woody tissue in trees. It will not directly affect fruit, but can decrease the overall vigor and health of the tree and affect fruit production and quality. Concepts for raised mattress grids to save lots of area