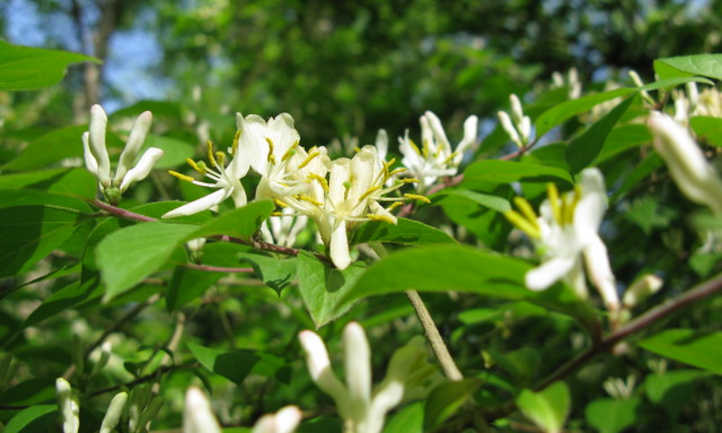 Some of my favorite memories from childhood involved congregating in the woods with friends to consume the nectar of the sweet-smelling Japanese honeysuckle plant. The fragrant flowers of Lonicera japonica are a part of my adulthood as well, though the plant is an invasive species.

I still enjoy its sweet smell in early summer, and stop to have some nectar. But because it’s an invasive species, I opt for a native species instead. Coral honeysuckle is naturalized here and does just as much for pollinators while conserving local ecology.

Turns out, many gardeners who want to avoid invasive plants in their gardens opt for less aggressive species. Hall’s Japanese honeysuckle (Lonicera japonica ‘Halliana’) is one such cultivar that doesn’t spread as aggressively. Gardeners everywhere have so many options when it comes to indigenous honeysuckle vines. These native plants creep and climb over fences, trellises, and walls to form a dense mat of trailing vines, just like Lonicera japonica.

All About Japanese Honeysuckle 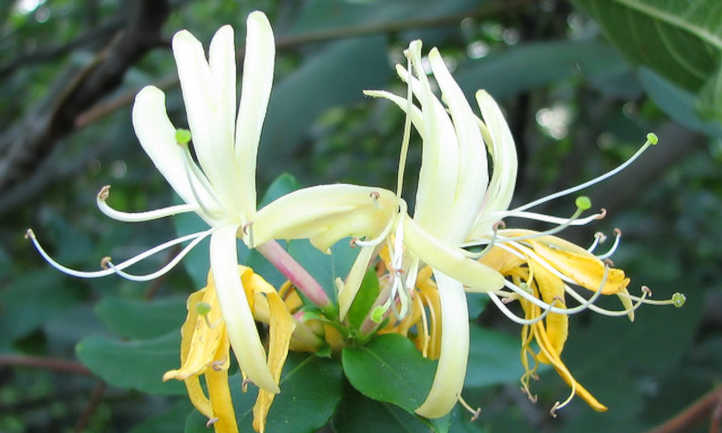 Japanese honeysuckle (Lonicera japonica) is known as golden-and-silver honeysuckle or Chinese honeysuckle. This plant species is native to Eastern Asia – particularly, Japan – and has taken a foothold across the world. It was originally introduced to North America from Japan in the early 1900s as an ornamental plant. It’s still valued for that today.

Lonicera japonica is a perennial, evergreen to semi-evergreen vine with a wide vegetative spread and rampant growth throughout the world. It’s an understory plant that climbs up to 33 feet tall in some natural areas and spreads up to 6 feet. Each vine is covered with ovular, opposite leaves. New growth vines are reddish and covered with hairs. Older stems take on a woody texture and a hollow stem density as they mature.

In late spring, buds form on the stems and white Japanese honeysuckle flowers bloom in early summer, emitting a sweet fragrance. The flowers yellow as they mature, and produce delicious nectar that can be consumed by pinching the base of the blooms and pulling the stamens through. As the flowers bloom and die away in late summer, black, spherical berries form in their place. Each of the berries contains a few highly productive seeds, thus the need for aggressive control of the vines in natural areas. In places where winters are cold, Lonicera japonica is deciduous. It’s evergreen in temperate areas. The root is rhizomatic.

Today, municipalities choose the plant to assist with erosion control as a ground cover along banks and cliffs. Lonicera japonica is lovely in gardens along fences or arbors. It’s an excellent understory companion for small trees if it is pruned into shrubs. People enjoy Japanese honeysuckle in small patches. Wildlife uses of the plant include nectar for hummingbirds, butterflies, and moths. Related species, such as Lonicera sempervirens, also known as coral honeysuckle are non-invasive native shrubs that provide cover for songbirds and quail.

The fragrant flowers of Lonicera japonica are used for their edible nectar and their sweet scent. While the leaves and flowers are used in Chinese medicine, it’s best to leave the consumption of non-flower parts alone, unless you’re instructed by a medical professional to consume them. Gardners who want to enjoy the benefits Japanese honeysuckle brings to a garden without the threat of introduced invasive or rampant growth can plant the slightly less invasive Hall’s Japanese honeysuckle, or Lonicera sempervirens, which are native plants.

Plant Lonicera japonica either via transplant or by seed. In areas where Japanese honeysuckle is deciduous, transplant shrubs in late winter. Where the shrubs are evergreen, plant in temperate seasons, in spring or fall. Grow new plants from seed in winter, and transplant them out in spring. Choose an area for your transplants in full sun that has average, well-draining soil. Dryer areas and those with partial shade keep the aggressive vine in check. Choose a place around small trees or use the plants as ground cover for erosion control. They’re excellent in containers, too.

To transplant this trumpet creeper, prune it to ⅓ its size and dig a hole large enough to fit the roots and soil from its nursery pot. Place the root system in the hole and cover it with soil. Mound the base of the plant slightly for good drainage. Provide adequate support for the vine and vegetation.

To sow Japanese honeysuckle seeds in spring, soak peat moss in water and wring it out. Then bundle the peat and press the seeds into it, placing the whole mass in a clear plastic bag. Seal it and put it in the refrigerator for 60 days. Then sow them in flats with peat moss and potting soil. Wrap the flats with plastic wrap or cover them with a dome. Within 30 days seed germination occurs. 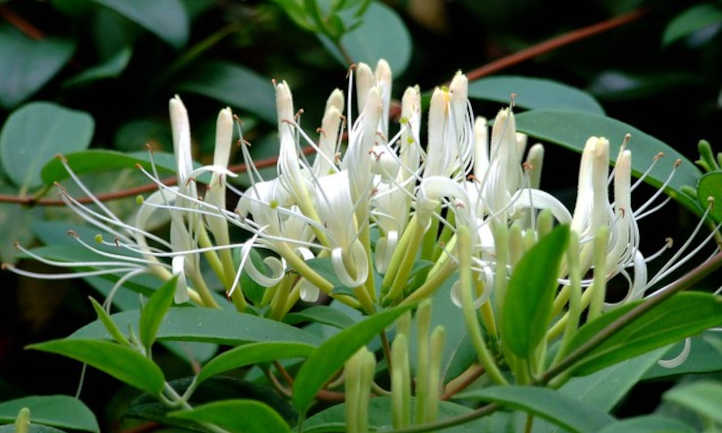 Because Japanese honeysuckle plants are so prolific (sometimes invasive) you’ll have no problem cultivating them. Most people focus on keeping the woody vine under control. Let’s discuss basic care and prevention of the invasive nature of this lovely ornamental.

Japanese honeysuckle requires full sun to partial shade. Consider growing it as a ground cover under trees to tamp down vigorous growth, especially if you live in Florida or another state where this ornamental is invasive. 6 to 8 hours of sun is best. Zones 4 through 9 are host to Japanese honeysuckle. It gets out of bounds in temperate regions that sit between 65 and 85 degrees Fahrenheit. Those who live in warmer zones should plant the vine under trees or along shady aquatic areas to keep it in line.

Native species will be adapted to the conditions in their zones. Cultivation of Japanese honeysuckle in colder areas involves deciduous dieback of vegetation in extended periods of 30 degrees and below weather. Heat is no problem for the plant, though flowers will not produce as adequately in hot, dry areas.

Water at the base of your Japanese honeysuckle plant enough so the ground is moist but not overly wet. Its roots need at least 1 inch of water per week. In Florida, the humidity is enough to keep moisture in the earth, preventing the need to water often. Outside of Florida, gardeners may find themselves watering a couple of times per week. In shade, the plant will not require as much water because the ground won’t dry out as quickly. Do not wet the foliage of the plant when you water.

Consider not watering where precipitation is enough to support the vine. This keeps it under control. Because the Japanese honeysuckle is drought-tolerant, it loses vegetation when it’s dry, but doesn’t die. Drip lines or soaker hoses provide the best irrigation to these plants. You won’t need it during dormancy in fall and spring.

Any well-draining growing medium works for this forest vine from Japan. It thrives in poor soil, as evidenced by its invasive status here in Texas and Florida. While it can root in almost any medium, Japanese honeysuckle appreciates a pH of 5.5 to 8.0 and good drainage.

There is no need to fertilize your Japanese honeysuckle, especially in areas like Florida or Texas, where the plant spreads aggressively. However, in containers, a full spectrum 10-10-10 foliar feed or a general plant food fertilizer helps it produce healthier foliage.

One of the most important things involved in the maintenance of Japanese honeysuckle is keeping that baby in check! As you prune to control the vine and train it into your desired shape, remove all the cuttings to prevent rooting of them or the spherical fruits that drop off the plant. If you’re growing the vines near trees, ensure they’re not choking them. Light pruning and removal of fruits for those plants in containers will prevent germination and growth of new plants.

Aggressively remove any suckers that crop up around the base of your honeysuckle. As the flowers bloom and yellow, enjoy them as a nectar snack. This keeps the yellow flower from turning to fruits which then grow more vines. There is nothing like snacking on the nectar of yellow honeysuckle flowers in the summer!

We discussed how to germinate seeds of Japanese honeysuckle in the ‘Planting’ section above. You can also propagate the plant by layering or division of rhizomatic roots. To layer them, scratch the surface of one of the vines, and place it under the earth affixing it with a rock. This helps your honeysuckle spread. Divide the vine by digging up the rhizome and breaking it between growth points. Bury the rhizomes elsewhere and watch the flowers grow. 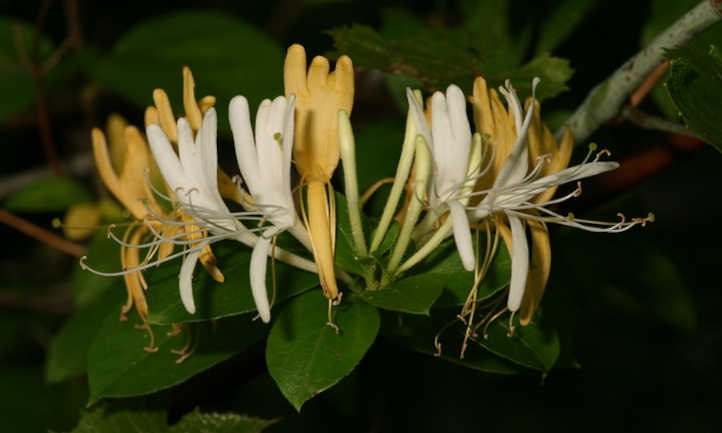 While you really shouldn’t have any problems with Japanese honeysuckle overall, here are a few things you might encounter. These issues are rare occurrences, though.

In too much shade, flowers may not be as prolific on your honeysuckle. If fragrant blooms are what you seek, try to find a happy medium between shade and full sun. Prune overhead branches to adjust and add more sunlight. Shade the plant if it produces too much. In heavy clay soils, honeysuckle can suffer from nutrient deficiencies which could cause yellow leaves. Provide adequate drainage from the get-go, or introduce drainage elements in a ring around the vines to adjust.

While small infestations are the worst you’ll see on the vines, there are a few pests to look out for.

Aphids feed on the sap of leaves and vines and can cause defoliation in extreme cases. To prevent them, start with a strong stream of water from a hose to rip their suckers off their bodies and prevent further feeding. Horticultural oil sprays, neem oil, or insecticidal soap are good follow-up measures if necessary. Do not spray the vines when they flower. Instead, wait until after that time, and apply sprays in intervals of 7 to 10 days until the aphids are gone.

European honeysuckle leafroller moths lay eggs on the leaves of the vine. The eggs hatch and small striped caterpillars feed on the leaves. Eventually, they roll their cocoon up in a leaf, and the cycle continues. Remove cocoons as you find them, and spray horticultural oil or spinosad spray on leaves to prevent leafrollers.

Honeysuckle sawflies curl up the undersides of leaves as they feed on the vine. These small striped insects with cloudy wings lay eggs that produce 1 inch long larvae that keep the feeding going. We recommend the use of spinosad to prevent sawflies from feeding on the vegetation.

Leaf blight is a fungal disease that causes gray spots, and thickened curled leaves. In later stages, the spots develop spores that spread by wind to other parts of the trumpet creeper. Prune and destroy affected branches, and apply copper fungicide sprays in spring when new growth emerges to prevent leaf blight.

Powdery mildew is a fungal disease that produces white patches on leaves. While it’s not a serious problem, it’s highly contagious. Remove any diseased leaves as they appear. Copper fungicides also treat the issue. Spray them as soon as symptoms appear, and reapply in intervals of 7 to 10 days until the problem ceases.

Crown gall is a bacterial disease that causes swelling and rough galls at the base of the trailing vine. Prune effectively with clean cuts to prevent bacterial entry at wounds. Keep your pruners and garden tools clean and disease-free as another prevention method. Overall, affected honeysuckles should be removed and destroyed to prevent spreading the bacterial infection to other plants in the garden. 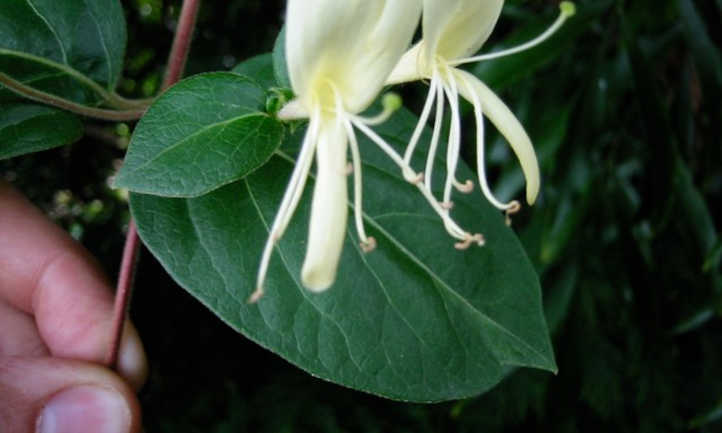 The leaves of this honeysuckle are deep green and rounded with a slight point to the tip. Source: Mollivan Jon

Q: What is Japanese honeysuckle good for?

A: It’s lovely to look at and smell, and helps control erosion. It also provides wildlife with habitat.

A: It will bloom within its first growing season.

Q: Why is Japanese honeysuckle a problem?

A: It’s aggressive and takes hold in almost any ecological niche, outcompeting other growth. 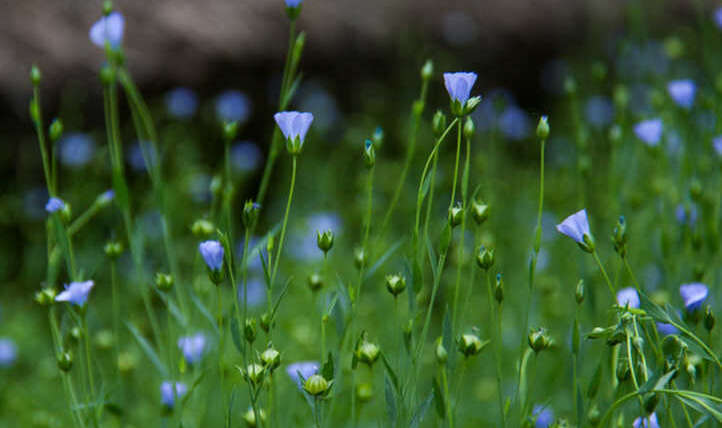 Flax plant: fibers, seeds and the whole lot else 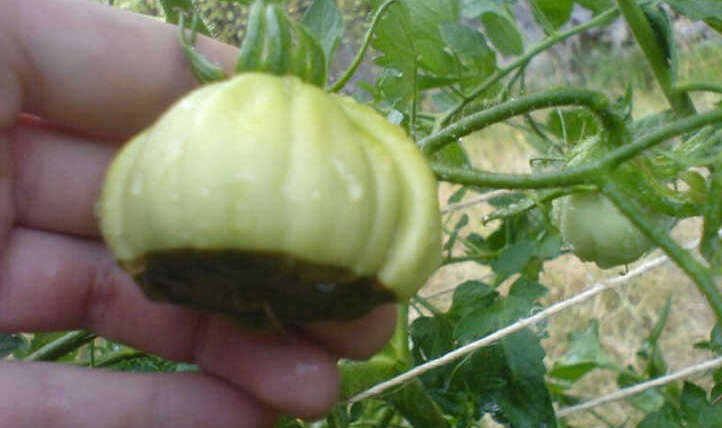 Blossom finish rot: the fear of the tomato growers