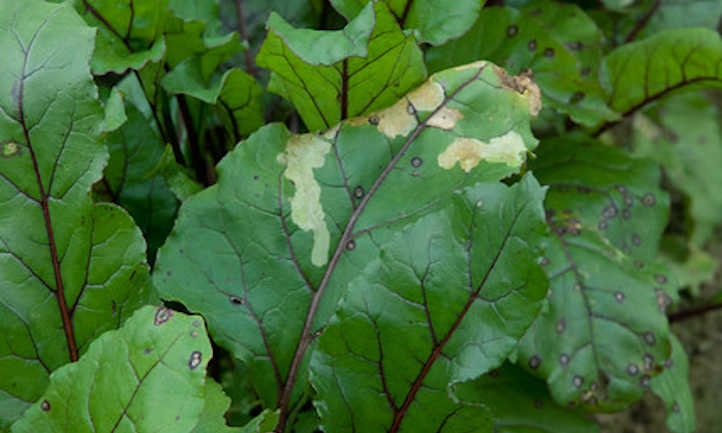 Have you noticed large dark spots in the center of the leaves of your plants that grow larger over time and eventually cause whole leaf death? Has this occurred during the wet and rainy summer season? You might be dealing with one of the many types of fungal diseases in the genus Cercospora called the Cercospora leaf spot.

There are dozens of species in this particular genus. They all specialize in the types of plants that they affect. There are over 1200 species of Cercospora in total. The most common is Cercospora beticola. All species are characterized by small spots that cluster and develop into lesions, eventually turning the leaves brown, causing what is known as "complete leaf collapse" or defoliation. Certain species are more prone to the spread of this fungal disease, and some are naturally resistant to infection.

It would be naive to say that the first signs of cercospora on leaves are nothing to worry about as gardeners need a good plan of attack at this point. Allowing an affected beet plant or crop to go to severe yield loss is not a good option. Identify these lesions early and use effective management to make sure your neighbors don't have the same problems as you. With the right resources and measures, you can prevent the infection from growing past the point of resistance. And you can prevent species of Cercospora from developing on other plants that you enjoy growing.

What is Cercospora Leaf Spot?

Warm and constantly humid ambient conditions with high humidity (especially warmth and humidity at night) are favorable for all species of the Cercospora fungus. Temperatures of 77 to 95 degrees Fahrenheit are optimal for spore growth, so early summer or late spring prevention is essential. In this context, proper irrigation management is important. A culture infected with Cercospora leaf spot shows symptoms when small, dark circular lesions less than an inch in diameter appear on the leaves. These lesions have a purple to maroon border and a gray or brown interior. Sometimes spots that appear are covered with a light gray or purple fluff. You will first notice these lesions on mature leaves of the plant. As they multiply, they move to younger leaves.

Early on, the lesions cluster and begin at the base of the plant or the outer diameter of the plant and move up and in. As these lesions appear and the disease progresses, nutrients from fruit, vegetable, and flower production are diverted to leaf production, making further development of non-leaf elements impossible. This disease can reduce your yield by a large percentage; anywhere from half up to all of your efforts could be foiled.

This varies depending on the type of plant. Some are more prone to leaf collapse than others. Scientists in agricultural fields have studied varieties that are naturally resistant to CLS. Gardeners in historically warm and humid climates may be more likely to be aware of these species than to risk spreading the pathogen that causes CLS or losing 50 percent of their crops in severely affected plants.

Common crops susceptible to the leaf spot of the Cercospora fungus are those of the beta species: Swiss chard, sugar beet and spinach. The pathogen often spreads from weeds that harbor the disease. Treating the disease is simple, but it requires meticulous attention to detail, as even remaining seeds and plant debris can be compromised.

Gardeners and farmers often come into contact with Cercospora beticola, which attacks the beta group like those listed in the previous section of this article (sugar beets and leafy vegetables). But there are also many other types of Cercospora leaf spot. Roses are prone to Cercospora rosicola. Hydrangeas have a tendency to get infected with Cercospora hydrangeas. Eggplants are susceptible to Cercospora melongenae. The number of species is evidence of how adaptable this fungus is and how easily spores can spread from one plant to another. Proper management and control of the spread is critical to the health of your garden and your surroundings.

Not all Cercospora species show the same symptoms in all affected species, and not all are known as Cercospora leaf spot (CLS). For example, CLS in soybeans is commonly referred to as Cercospora disease. The same term is used for cercospora damage to juniper trees, celery, and carrots. CLS is the end result of infections with certain Cercospora pathogens. Cercospora on maize is called the gray leaf spot.

Life cycle of the Cercospora fungus

Cercospora species begin their reproductive cycle with the spread of infected leaves, seeds, or other plant debris, usually by wind and rain. They then attach themselves and enter the cell structure of healthy leaves. Then symptoms of infection appear. The fungus creates lesions on the plant that allow further asexual reproduction of spores that can continue the cycle. Sometimes this pathogen originates in infected garden beds, tools, or weeds nearby. It worsens when an infected seed is planted or when debris is left in the garden soil. When the night is warm and humid and temperatures stay in the 77 to 95 degree range, the conditions for CLS are optimal.

Symptoms of the leaf spot

Cercospora rosicola appears dramatically as very pronounced purple necrotic lesions with a light brown to gray center. The Cercospora hydrangea looks similar, but the center of the spots tends to be light gray to white. Kale CLS symptoms vary by variety, but typically show light brown discoloration. Sometimes kale has the distinctive purple border on each lesion. The spinach cercospora leaf spot is similar to that of kale and does not always have a dark brown border. However, severely affected plants all have the same general symptoms: the leaves are brown and dead at the defoliation point.

There are other pathogens that look very similar to the Cercospora leaf spot, but are caused by bacteria. A black leaf spot on roses could potentially be mistaken for CLS if not carefully considered. Black leaf spots are clustered without necrosis. They won't be that round either. This is one way to differentiate between a fungal infection and a bacterial infection. Use a small magnifying glass to see if any spots have developed. Light gray or light purple hair is more likely to be symptoms of a fungal infection than a bacterial infection. Knowing the difference between each disease will give you a good indication of the tools needed to control the problem and prevent it from spreading. There are many resources for disease identification. So feel free to research the determination process. A great resource is your local agricultural advisory office. 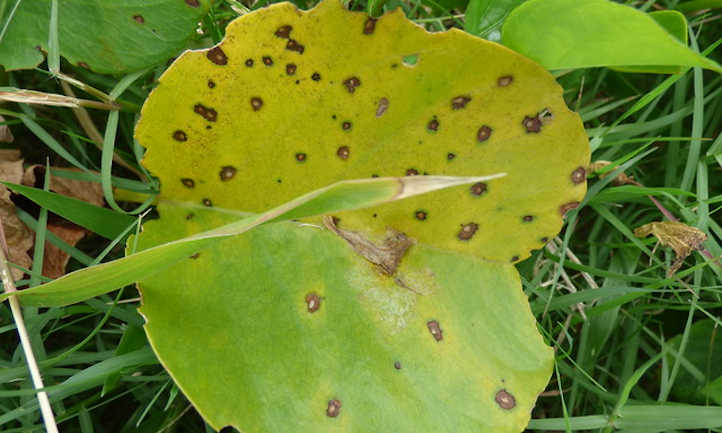 Ornamental plants like this Ipomoea pes-caprae are also susceptible to Cercospora. Source: Rigid

Although fungicides can be used to control Cercospora species, good gardening hygiene is the most effective way to prevent Cercospora leaf spot from spreading. It is important to watch out for Cercospora leaf spots during times when the summers are particularly humid and have high humidity that lasts all night. These conditions are favorable to Cercospora spores and can promote disease development. Management is important when temperatures are high. Environmental conditions are your first point of understanding how to control the CLS.

Organic treatments are slightly less effective than chemical methods, but they exist and are actually workable. They are much more common than the most common chemical methods for the home gardener too, which helps!

Comparative studies of the organic and chemical treatment of Cercospora beticola in beet crops found that the most effective treatment used two things: a good quality liquid copper fungicide and Bacillus amyloliquefaciens. The latter is a bacterium that acts as a natural fungicide and the former is copper that has been dissolved and turned into a liquid. Both are effective fungicidal agents, but when paired they had extremely good effects against Cercospora species.

Neem oil is also used, but for prevention rather than treatment. Apply the fungicide protectant before conditions where CLS disease is expected to occur. If you know your summer crops will be exposed to high temperatures and high humidity, use protective fungicides as a prevention method.

The only safe way to prevent Cercospora leaf spot is to properly manage the site where you will grow with adequate watering, clean, debris-free, and limited contact with infected areas and plants. Improper watering increases the humidity, which the Cercospora prefers. Do not allow leaf contact with an infected culture or allow plants with CLS to be sown. With that in mind, avoid planting infected seeds as this will only extend the life cycle of the Cercospora leaf spot and give it more time to develop resistance to treatments.

Check every leaf on your sugar beet plant, roses, or those most susceptible to Cercospora leaf spots for symptoms, especially in humid, hot summers when the disease is more likely.

The best ways to manage CLS are through environmental prevention methods. Clean tools after each use. Keep infected plants away from your garden beds and compost piles. Crop rotation rather than plant next to a previously diseased location as spores usually hang in areas where infection has occurred. Choose seeds for plants that are resistant to defoliation caused by CLS. Some resistant plant strains have been identified by agricultural and horticultural scientists. 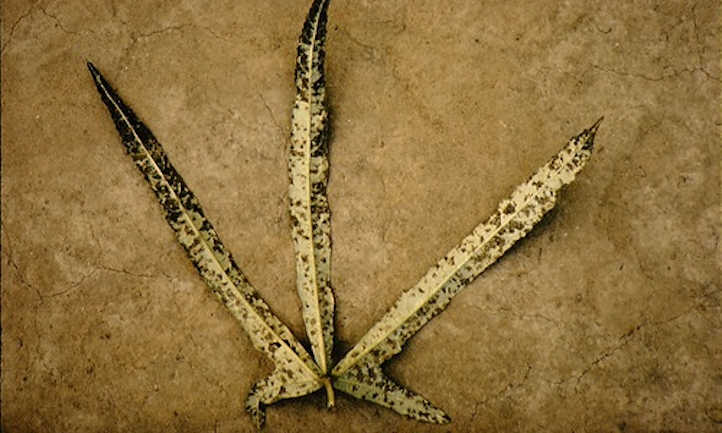 Severe cercospora can cause okra leaves to skeletonize. Source: JIRCAS

Q: is the leaf spot contagious?

A: Yes. Cercospora leaf spot is a highly contagious disease that can build up resistance over time and must be fought aggressively. The best ways to treat Cercospora leaf spot are cultural methods that remove all damaged material, rotate the plants, and avoid growing near previous breakout sites. Growing a resistant type of rose, sugar beet, and beticola plants is the best way to prevent this disease.

Q: Can you eat Swiss chard with Cercospora leaf spot?

A: You can, but at the point where spores have developed on a leaf or crop, it's best to remove the damaged foliage and wrap it up for disposal. Leaves with diseases such as Cercospora leaf spots have a significantly different structure than healthy ones. The texture of the plant could be woody and bitter. Severe infections lead to the complete death of the leaves. These cannot be consumed for nutritional value. 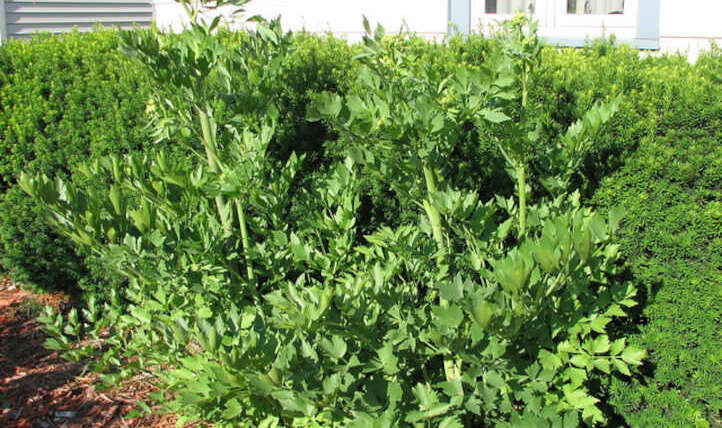