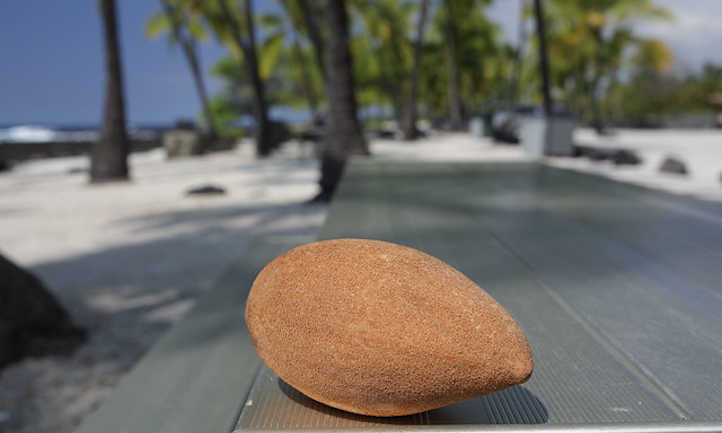 Mamey Sapote, the national fruit of Cuba, is a tropical fruit popular in Central America and the Caribbean. It is also grown in the United States in temperate areas of South Florida, California, Texas, and Hawaii. Though more common in South Florida, mamey sapote is difficult to find in other areas of the United States. You probably won't be able to find them in the grocery store's product section.

If you live in USDA Zone 9-11 and have enough space, you can grow Mamey Sapote at home! It is tolerant of many types of soil and at the time of ripening it produces up to 200-500 fruits per year. The mamey sapote fruit has a smooth, creamy texture and the taste is compared to sweet potatoes, pumpkin, and sweetened almonds. The fruits can be eaten raw, but are often used to make smoothies and ice cream.

Mamey is rich in vitamins, minerals, and fiber. It's a great veggie source of iron and is considered a heart-healthy food that promotes cardiovascular health and healthy cholesterol levels.

Once planted, the Mamey Sapote is there to stay as they are known to live up to 100 years!

Get a Mamey Sapote

Everything about Mamey Sapote

The mamey sapote tree, Pouteria sapota, is also commonly referred to as the mamey or sapote tree. Mamey Sapote is native to Central America, but has become popular in many tropical areas, particularly the Caribbean. The term "sapote" comes from the word "zapotl", which means "edible fruit" in Nahuatl, an Aztec language.

Pouteria sapota is a large, evergreen tree with thick branches and dense foliage. The leaves are large, green, lanceolate and concentrated at the tips of the branches. At maturity, the tree grows about 40 feet tall and can grow more than 60 feet under optimal conditions. Fortunately, the tree can be pruned to keep it a suitable size for its planting location.

The flowers and fruits grow in clusters on leafless branches. The white to green flowers are small and inconspicuous. The color and shape of the fruit resembles a coconut. However, the inside is very different. The pulp of the mamey fruit has a beautiful orange to red color. The size of the fruit varies depending on the variety, but is 4.5 to 8 inches in diameter. Each fruit weighs between 0.75 and 6 pounds and has one to three large seeds in the center.

Mamey Sapote is a tropical plant, so warm temperatures and plenty of water are required. It is tolerant of a variety of soil types and grows well in areas with an average of 178 cm of rainfall. Since the fruits take a long time to develop, it is common for flowers, developing fruits, and ripe fruits to grow on the tree at the same time. 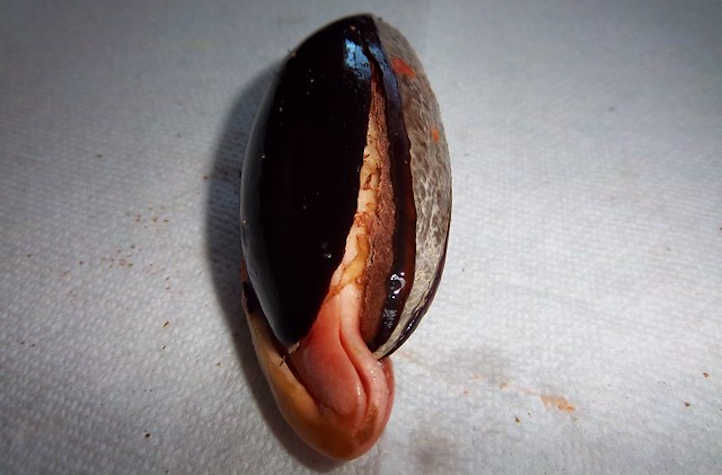 Every mamey fruit has a large seed. This is sprouting. Source: Eric Weisser

Pouteria sapota is most commonly planted as a grafted tree. It is possible to plant from seeds. However, the seeds must be planted shortly after harvest, otherwise they will lose their viability. Trees planted from seeds also take 7-10 years to produce fruit, versus 3-5 years with a grafted tree.

The best time to plant is in spring, when there is enough rain to establish a young tree. Avoid planting in winter as Pouteria sapota is sensitive to cold temperatures. If there is occasional frost, it is recommended to plant in a large pot that can be moved or protected during a frost event.

Choose a sunny location with at least 20 to 30 feet of space between nearby trees and structures. In order for the tree to thrive, it needs at least eight hours of direct sunlight a day.

When you plant the Mamey Sapote, you are digging a hole three times the diameter and depth of the root ball. Lay the soil around the root system and pile the soil surrounding the trunk about two inches higher than the ground.

In many areas of Florida, the water table is within seven feet. If you live in an area with a shallow water table, plant the tree on an elevated hill. Mamey Sapote trees require constant moisture, but cannot tolerate permanently saturated conditions. These conditions cause the tree to develop root rot.

Pouteria sapota is pretty easy to care for. Proper care is important to maintain a healthy tree that will produce high fruit yields year after year. 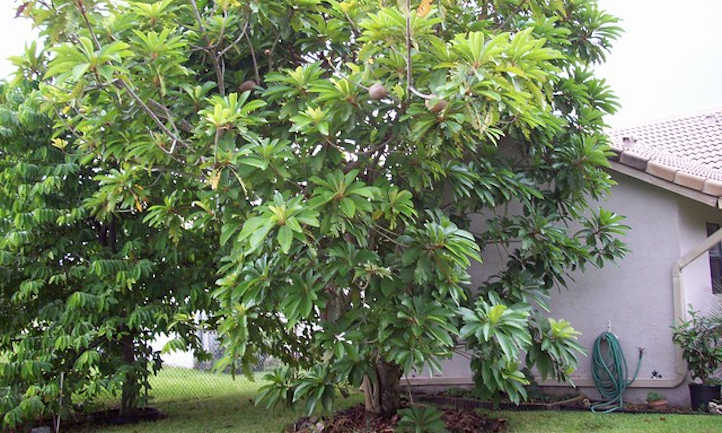 A mamey tree can grow huge, reaching 80 feet or more in height. Source: I like plants!

These trees are hardy to USDA Zones 9-11, so they are not frost tolerant. Young trees are prone to damage when the temperature drops below 32 ° C. Older trees can handle temperatures below 32 ° C for several hours with very little damage. Under 22 the tree dies. The optimal average temperature is between 77 ° C and 82 ° C. It is known that these trees thrive in climates in Central America that also reach 90-95 reach.

The best time to go to the water is early in the morning. This prevents the water from evaporating too quickly and allows the plant and soil to absorb the moisture. Watering in the evening sometimes enables stagnant water, which can promote disease.

Young trees should be watered immediately after planting and every other day for the first month or two. In general, old trees should be watered with an inch of water about every five days if there isn't enough rainfall. However, the type of soil plays a big role in determining how often and for how long to water. For example, if you have clay soil, you will need to apply more water less often than sandy soil. This is because the water holding capacity of clay soils is greater than that of sandy soils.

Both drinking hoses and sprinklers can be used for irrigation. It usually takes 200 minutes to apply an inch of water with a soaking hose. Sprinklers are much more variable, so a rain gauge should be used to determine the appropriate length of time. Watering is not required if there is at least 1 inch of rainfall during the week. In cooler months, the frequency of watering can also be reduced to avoid overwatering.

Pouteria sapota grows best in clay soils with good drainage. However, it is tolerant of moist soil types as long as there is adequate drainage. The ideal pH is between 6.0 and 7.0 but tolerates a wider range.

Fertilize with an 8-3-9 fertilizer formula twice a year in spring and early fall. Zinc and manganese deficiencies can occur depending on the soil. If there are deficiencies, foliar sprays are recommended every 6 weeks between March and September. Iron deficiency is also common and can be remedied by applying a chelated iron through a soil soak once or twice a year.

The pruning should be done in the warmer months after the fruit harvest. Young trees can be pruned to encourage 3-4 large branches. Older trees should be pruned to maintain a reasonable size.

Before pruning, look for flowers and young fruit at the base of the branches to avoid accidentally removing the developing fruit. If the fruits are not picked, they will naturally fall off after ripening.

Mamey plants can be propagated by seeds and grafting.

Trees propagated from seeds take many years to produce fruit. The fruit characteristics are also unknown and there are some cases where the seed-propagated trees do not produce fruit. Seeds should only be used for growing rhizomes, which will later be grafted with a known variety.

Grafted trees are the most reliable source because the properties are known and they produce fruiting years faster than trees propagated from seeds. 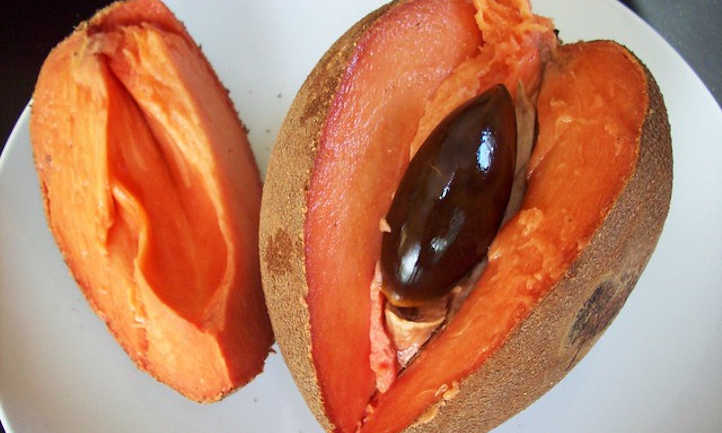 A ripe Mamey Sapote tastes like a mixture of pumpkin, sweet potato and almond. Source: I like plants!

Now for the best part, harvest and store the delicious Mamey fruits!

Eventually, the ripe fruits naturally fall from the tree. However, the fall will most likely damage the fruit. To pick the fruit, simply twist the fruit off the branches. Harvest time varies by variety, but most varieties are ready for harvest between April and September.

The easiest way to determine the right time to choose a mamey sapote is to scratch the peel of the fruit and check the color. If the pulp is green, the fruit is not ready yet. When the flesh is orange, red, or pink, the fruit is ready to be picked.

The fruit is still firm to the touch, so it is important to leave the fruit at room temperature for a few days to allow it to fully ripen. The ripeness is recognized just like an avocado. Lightly squeeze the fruit. When there is easy giving, the fruit is ripe and ready to eat.

Remember that the fruit takes 13 months to two years to develop. Patience is the key to harvesting good fruit.

Fruit can be stored fresh in the refrigerator for 1-2 weeks. For longer storage, cut the fruit into pieces and freeze. Frozen fruit can later be used in smoothie and ice cream recipes. The fruits can also be freeze-dried for a crispy snack with a long shelf life. 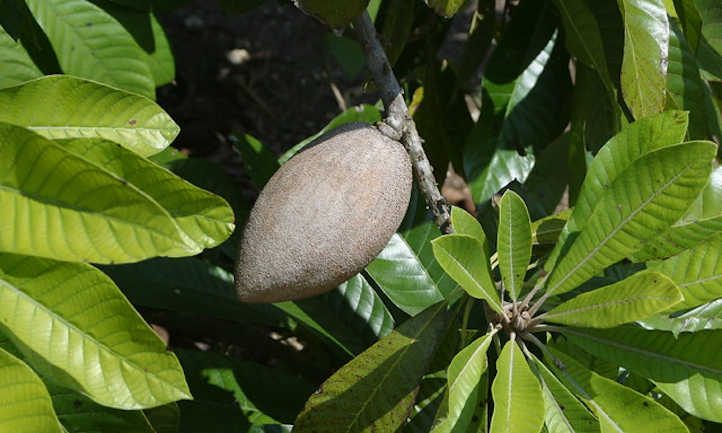 While Pouteria sapota is pretty easy to grow, that doesn't mean you won't run into trouble. Below are some problems and possible solutions!

Proper watering is the key to the growth of a healthy tree. Underwater can cause defoliation and fruit droplets. Lack of water and food also leads to low fruit production.

The Diaprepes weevils (Diaprepes abbreviatus) is a weevil found in Florida and the Caribbean. Adults feed on the leaves while the larvae feed on the roots. Adults are between 3/8 and 3/4 inches long. They are black with red, orange, or yellow scales on the elytra. Larvae are white grubs that reach a length of about 1 inch. Heavy infestation can lead to severe decline or death. Beneficial nematodes can be placed on the ground to control larvae. Horticultural oils can be sprayed to kill eggs and prevent women from laying eggs on the leaves.

Red spider mites (Tetranychus bimaculatus) can attack the leaves and cause point damage. Mites are extremely small, so the damage can be felt before the pest is discovered. Severe infestation can lead to defoliation. Mites can be controlled biologically with predatory mites such as Phytoseiulus persimilis. Horticultural oils will also be effective in controlling mite populations.

There are different types of Scale insects that will infest mamey trees. Scales are most commonly found on branches and twigs. Damage from dandruff is usually very minor. Most sheds are controlled by natural predators as long as the ant populations are controlled. Ants collect honeydew from scales to physically protect the scales from predators. Horticultural oils have also been shown to be effective in controlling dandruff insects.

The main disease problems that can arise are Root rot caused by Pythium and Rhizoctonia. Both diseases can be prevented or remedied with appropriate irrigation practices. These diseases occur when the tree is overwatered. The first indicator of a basic problem is a general decline in vitality and fruit production. Confirm the diagnosis by digging to check the moisture of the soil and the health of the roots. When the soil is saturated and the roots are brown and brittle, the tree suffers from root rot.

Anthracnose can also be a problem during the rainy season. This disease damages young tender tissues such as flowers and new leaves. Damage usually doesn't require treatment and will go away on its own once the conditions are dry. 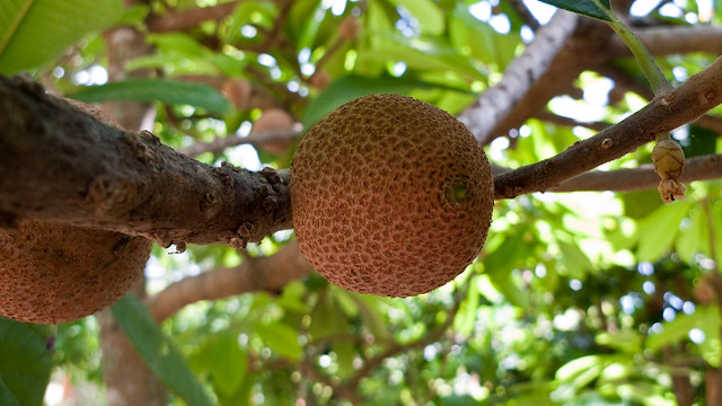 Each mamey fruit can weigh up to 5 pounds. Source: ehfisher

Q: How does a Mamey Sapote taste?

A: The taste of Mamey Sapote is compared to sweet potatoes, pumpkins, and sweetened almonds.

Q: How do you eat Mamey Sapote?

A: Mamey Sapote can be eaten fresh or added to smoothies, ice cream, and other sweet recipes.

Q: Does mamey fruit have anything to do with avocado?

A: While there are some similarities, Mamey Sapote is not related to avocado. 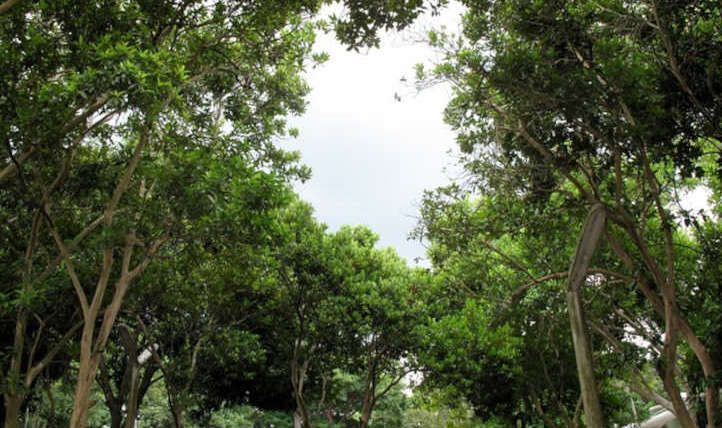 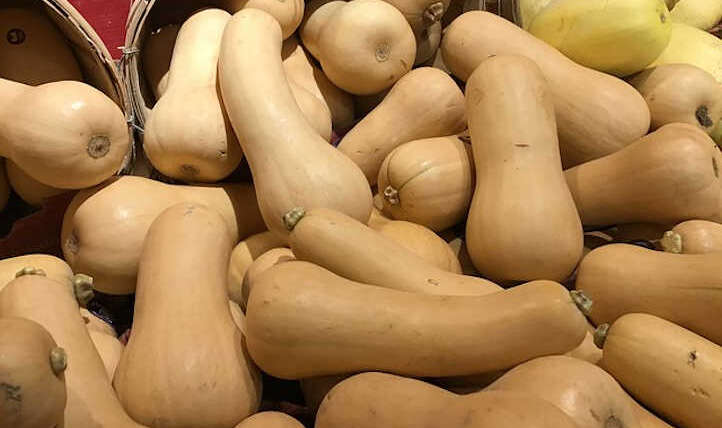